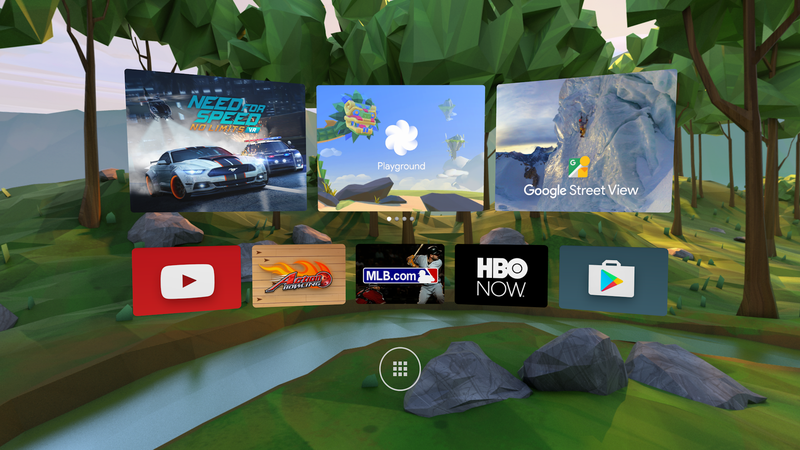 The big arguments in VR right now are all about hardware: Oculus Rift vs HTC Vive, Gear VR against a phantom Apple VR, Playstation VR against… something. Google was widely expected to wade into the fray this afternoon with some kind of standalone VR headset, or at least a direct Gear VR competitor.

Instead, the company glossed over “reference hardware” specs it’s providing to other manufacturers. But that’s because Google’s trying to position itself somewhere quite different in the developing VR market: As the go-to place for content.

Daydream is Google’s new home for everything VR. It lives as part of the upcoming Android N update, and will use powerful smartphones slotted into third-party-manufactured headsets to show you all types of content. It’s going to be a much more sophisticated version of Cardboard, Google’s current toe-dip into the VR marketplace.

Google envisions Daydream as a one-stop shop for all your VR needs. Inside the platform, there will be redesigned Google apps tailored for VR, and even a dedicated Google Play Store for VR. Big-name content providers like HBO and Netflix are already on board, IMAX will be bringing wide-screen movies to Daydream, and even the likes of NBA and MLB are going to build in content. Gaming is another big area of focus, with Ubisoft, EA and the makers of EVE: Online all signed up as partners.

I know what you’re thinking — none of this is radically different to what Samsung is doing with Gear VR, tying in partners to build apps and develop content.

But it’s worth remembering that we’re talking about Android and Google here, a platform and company that have a much wider reach than Samsung. Although Samsung has a clear head start, Google is working hard to make its platform more appealing by integrating a Play Store, Play Movies and even a bespoke version of Street View into Daydream.

Right now, Daydream is just a series of specs on paper. But Samsung, HTC, Huawei, LG, ZTE and Asus have all committed to building Daydream-compatible handsets in the near future. That’s very nearly a clean sweep of the major Android manufacturers (Hi, Motorola!). So by this time next year, nearly every major flagship Android phone on the market will be Daydream-compatible.

Cardboard VR has been a success because it put VR into the hands of millions of smartphone owners, people who wouldn’t have shelled out for an Oculus Rift. Provided that the headset and controllers aren’t too expensive, Daydream could do the same thing, but with much higher-quality VR, and a dedicated library of Google apps to choose from.

If everything works according to plan, Daydream becomes the biggest VR platform and the No. 1 target for developers and content makers working in VR. Once that happens, well — Google will be sitting pretty as the go-to platform for the next generation of making content. Not bad, for a company whose only VR headset is made of cardboard.