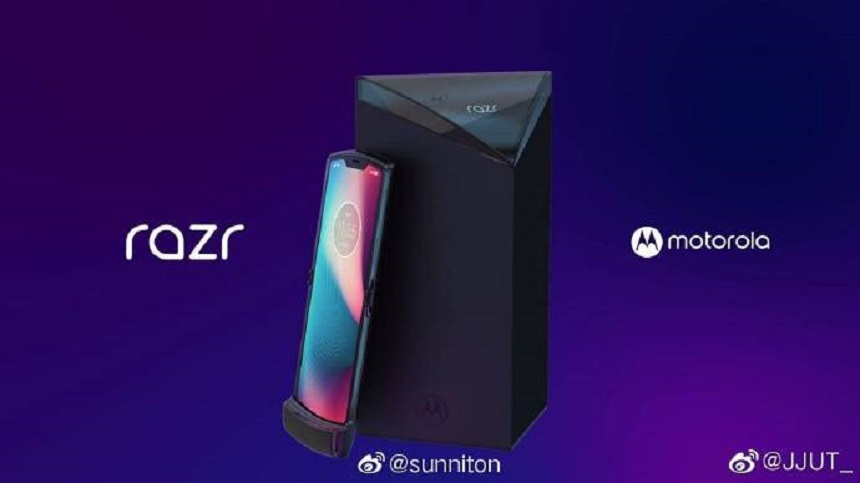 We’re still not entirely sure who the rebooted Motorola Razr is for, but it is without a doubt one of the most intriguing phones of 2019. Rumors of a foldable Razr have been floating around since last summer, and this weekend, a Weibo user going by sunniton shared what appear to be marketing photos of the unannounced device. While they might be fake, every new phone leaks eventually, and the foldable Razr is expected to be unveiled soon.

The phone in the image above looks virtually identical to the device that was pictured in a patent at the beginning of the year. It has the same large bezel at the bottom, the same speaker notch at the top, and a hinge at the center of the phone where the display folds in half. There are a few subtle differences, but it’s clearly the same phone.

The object the phone is resting on appears to be the retail box in which it will ship. In the following photo, taken from the same Weibo comment, we see the foldable Razr sitting in the insert from the box in the upper left, while all of the documents and cords are arranged neatly on the ground in front of the box:

We still haven’t heard much about the specifications of the Razr, but it is expected to be a midrange device, likely with a Snapdragon 710 processor on board. The leaked images might also confirm that the Razr won’t have a headphone jack, as a 3.5mm dongle seemingly comes in the box (along with USB-C headphones).

Samsung kicked off the foldable smartphone era with a resounding thud, as Galaxy Fold review units were found to be breaking at an unacceptable rate, forcing the Korean company to delay the launch date. With a more reasonable price point and a more durable device, HMD Global (the company that acquired the Motorola brand) might actually have a chance to develop a niche of its own in what is still a brand new segment of the market.