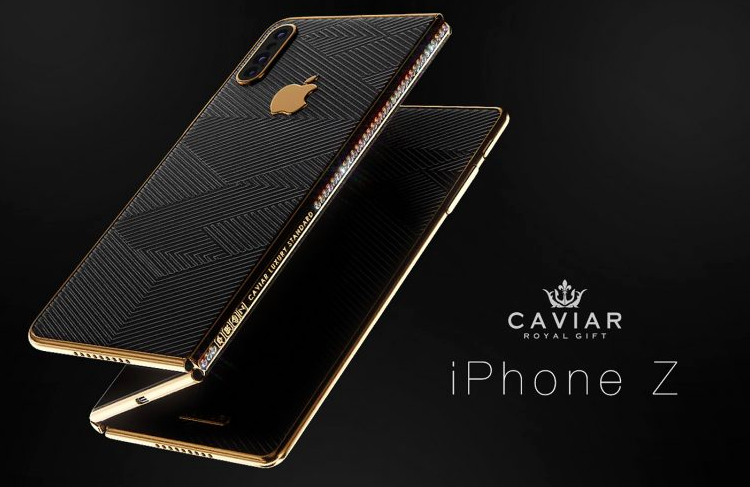 Foldable smartphone designs are all the rage at the moment among handset makers, with the form factor currently the focus of widespread media coverage given that Samsung is about to launch its Galaxy Fold a week from Friday. With that in mind, Russian manufacturer Caviar has decided to live up to its reputation for exclusive and super-luxe phone designs and crafted a concept design showing what a foldable iPhone might look like.

The image at the top of this post shows the design, which includes a 10.4 flexible display, a diamond-studded body that can be folded twice and a triple-camera setup.

Perhaps in part thanks to the Z-shape that you can see when the phone is partially folded, Caviar dubbed this completely unofficial design the “iPhone Z.” As envisioned, you can also use this device in any of a few different modes.

There’s the selfie mode, which relies on the triple camera that can be used combined with one of the flexible screens. Tablet mode is the result of opening up the device completely, giving you a display with a resolution of 3876 x 2758 pixels. You could also use the fully opened gorgeous screen as a kind of small TV, for watching movies and shows, and the device also functions as a quasi-laptop, with the double-fold giving you a screen for a keyboard and another for the display.

Cavaiar’s idea would be that the iOS interface automatically and seamlessly responds to however you’ve got the device positioned, switching you to that desired mode without you having to take any action. Folded, you’ve got basically a modern smartphone screen with a 20:9 aspect ratio and a bezel-less Super Retina HD (458 ppi) display. Unfolded, you’ve then got an iPad-like screen with an aspect ratio of 3:2.

Meanwhile, the design incorporates a camera system with three 15MP lenses. The display is equipped with Touch ID and works with a USB-C connector. Details of this concept design were reported by Dutch tech news blog LetsGoDigital, which also quotes a Caviar representative as saying that the company has its own ideas about where it think Apple should go next design-wise. Which is why it decided to package them in the form of an unofficial concept that it wanted to release to the public.

It wouldn’t be a Caviar design without an extravagant touch, which is the reason this design also includes the presence of 90 diamonds that are hidden in the body of the phone. To see them, you just either fold or unfold certain parts of the phone.

Suffice it say we probably won’t be seeing a diamond-crusted smartphone from Apple anytime soon, nor one with this price tag. Caviar imagines its design, assuming it ever made it to the real world, would run you the equivalent of almost $3,300.