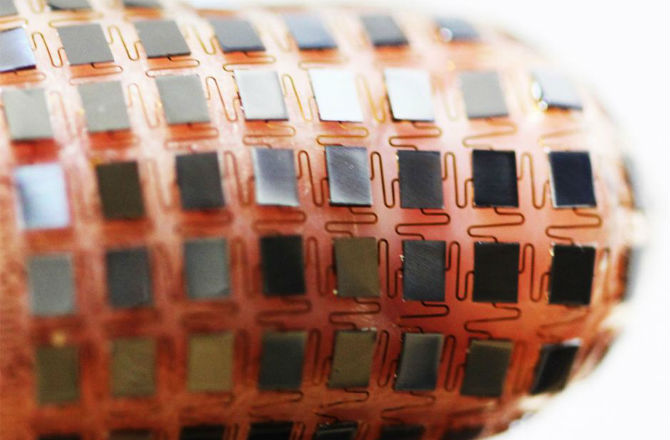 One of my biggest gripes with today’s smartwatches is charging — specifically, that I have to plug in my wristputer every night, or it becomes a useless and expensive hunk of metal. But if this flexible solar-powered battery becomes a reality, we could finally have wearables that live up to the hype.

A team from the University of Illinois, Northwest University, South Korea and China developed the battery, which they say is capable of changing its shape to fit in various devices. The various components of the battery and solar cells are integrated into a silicone shell and connected by flexible copper-polymer joints. The result is a charging and storage solution that can stretch and bend by 30 percent without losing its ability to generate solar charge.

In a paper published in well-reputed journal Proceedings of the National Academy of Sciences, the researchers propose that the battery cluster could be mounted to your skin, and provide enough charge to power a wearable device. One of the benefits of the design is that it’s reasonably modular: at the moment, it mostly focuses on tiny batteries and solar arrays, but it would be possible to integrate processors and sensors into the design, to make the entire wearable self-powered and flexible. The silicon casing also has the benefit of being waterproof.

As ever with battery research, there’s a long way to go until we see the tech in a production device. There’s a big gap between making a bespoke solution in a lab, and mass-producing something cheaply and consistently. Battery breakthroughs have been promised for years; this at least has the benefit of taking existing tech and repackaging it in a more wearable form factor, rather than promising a miracle of chemistry to give us month-long batteries.