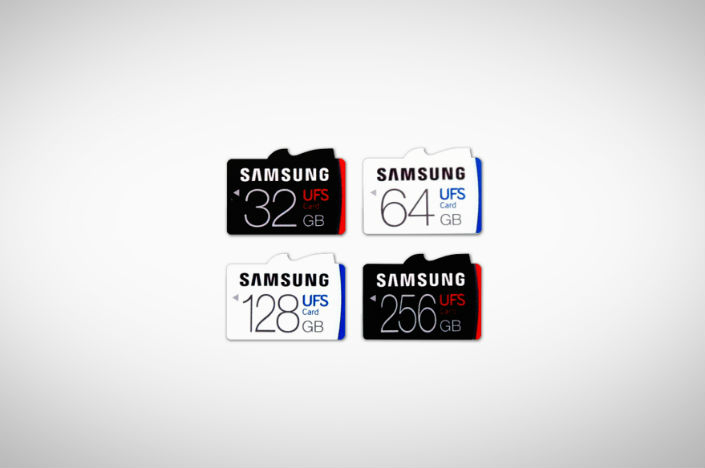 Samsung and SanDisk are looking to one-up each other when it comes to expandable memory for smartphones and any other device that supports a microSD card. SanDisk made a 200GB card last year that is quite affordable, and then Samsung came up with a 256GB model. A few weeks ago, SanDisk matched Samsung’s 256GB card with two new microSD options of its own, both more affordable than Samsung’s card. But Samsung stepped up its game and killed the microSD card completely.

The company’s latest memory offering is a UFS 1.0 storage solution that will work with future devices that can support expandable storage, but it offers the same lightning-fast storage experience as the Galaxy S6 and Galaxy S7. In fact, these new cards are just as fast as SSD drives.

Samsung last year switched to UFS 2.0 storage for high-end mobile devices, with the Galaxy S6 being the first to get these new ultra-fast memory chips. Short for Universal Flash Storage, UFS can significantly improve the smartphone experience, allowing faster access to the contents of a phone.

Oddly enough, Samsung does not mention Android devices in its press release, saying the new memory card has been designed for “mobile shooting devices such as DSLRs, 3D VR cameras, action cams and drones.” Samsung did not announce actual release dates or pricing details for the UFS 1.0 memory cards either, but it did reveal performance details.

The cards offer “more than five times faster sequential read performance compared to that of a typical microSD card,” as they’re able to read sequentially at 530 MB/s, which is on par with SSD sequential read speeds.

“With this UFS card, consumers have the ability to read a 5GB, Full-HD movie in approximately 10 seconds, compared to a typical UHS-1 microSD card, which would take over 50 seconds with 95MB/s of sequential reading speed,” Samsung writes. “Also, at a random read rate of 40,000 IOPS, the 256GB card delivers more than 20 times higher random read performance compared to a typical microSD, which offers approximately 1,800 IOPS.”

UFS cards will read a 5GB Full HD movie in 10 seconds, compared to 50 seconds for a microSD card that can do up to 95MB/s sequential reading.

As for write speeds, the 256GB UFS card reaches a top speed of 170MB/s, or almost twice the speeds the fastest microSD card can achieve. “To shoot 24 large/extra fine JPEG photographs (1,120 megabyte (MB)-equivalent) continuously with a high-end DSLR camera, the 256GB UFS card takes less than seven seconds, compared to a UHS-1 microSD card which typically takes about 32 seconds, at 35MB/s,” Samsung explains.

Well, SanDisk, the ball is in your court now.

UPDATE: Samsung told BGR that the new UFS cards are actually based on the UFS 1.0 not the UFS 2.0 standard. Furthermore, Samsung clarified that the new cards will not be compatible with the current microSDXC slots, which means you won’t be able to use them in any commercial products that won’t physically support them. In addition to a specific slot, the cards also require an application processor that has UFS memory management functions built-in. The story has been updated accordingly.