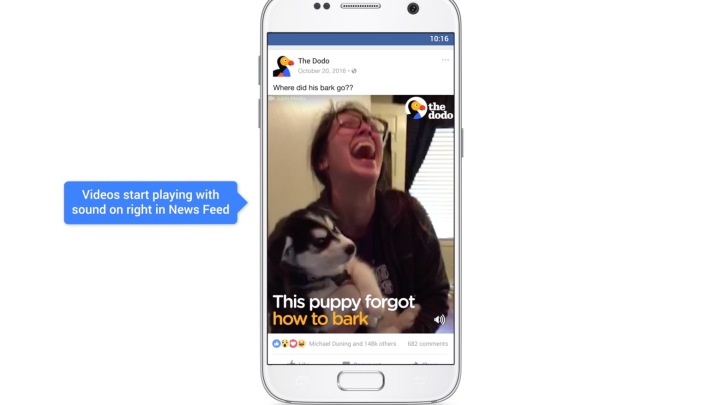 Facebook is about to get louder. On Tuesday, Facebook announced a series of changes and additions that are currently rolling out to the site’s video platform. A majority of these changes are par for the course and make a great deal of sense, but one in particular stands out — from now on, sound in videos on the News Feed will automatically fade in as users scroll to the videos and fade out as they scroll past them.

Dana Sittler, Product Manager, and Alex Li, Engineering Manager at Facebook say in a recent blog post that they have received positive feedback from users who have been testing this feature over the past several months. Therefore, they have decided to roll the feature out to all Facebook users.

If your phone is on silent, videos will not automatically play with sound, but otherwise, your feed is going to be a cacophony of cooking and puppy videos as you scroll. You can also turn the feature off by heading to the Settings menu and switching off “Videos in News Feed Start With Sound.” The managers says that messages will appear on Facebook explaining to users how the new system works.

While some users will be relieved that they no longer have to tap on a video to hear it, it’s hard not to see the feature (which, again, will be turned on by default) becoming an issue for users browsing in class or during a meeting or in any circumstance when they would rather their phone not make any noise.

In addition to the auto-sound videos, Facebook is also improving the way that vertical videos look on the News Feed in the mobile app, allowing users to watch minimized videos in the corner of the screen as they scroll and introducing a Facebook video app for Apple TV, Amazon Fire TV and Samsung Smart TV.