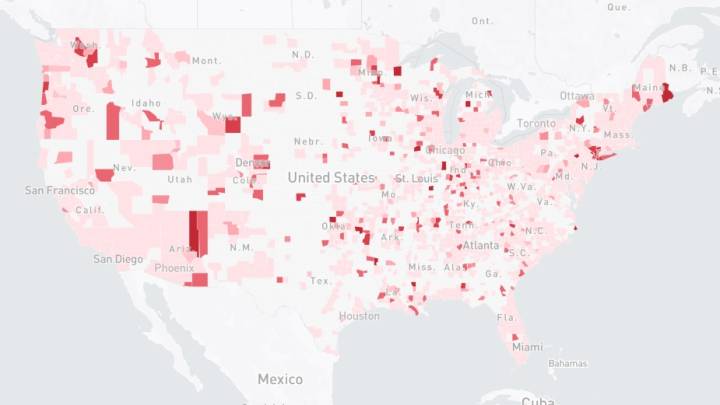 The novel coronavirus pandemic isn’t going to end until we either have a reliable treatment or an effective vaccine. In the meantime, the best way to control the spread is to test as many people as possible, use contact tracing to identify those who came into contact with the infected individuals, and make sure they all self-isolate so that they don’t infect anyone else. This is clearly easier said than done, but on Monday, Facebook introduced a valuable tool that should help governments decide where to allocate their resources based on the spread of the virus.

In recent weeks, Facebook has been prompting users to take a survey conducted by Carnegie Mellon University. The survey asks respondents about disease symptoms, and Facebook is now using this data to produce county-by-county maps showing where COVID-19 symptoms are most frequently being experienced.

In an op-ed for The Washington Post, Facebook CEO Mark Zuckerberg says that Carnegie Mellon is getting about a million responses to its survey per week. The responses line up with data that is already publicly available, suggesting that the results could be useful for tracking the spread of the disease and providing information that might be valuable when deciding where to send hard-to-find resources such as PPE and ventilators.

“This is work that social networks are well-situated to do,” Zuckerberg says. “By distributing surveys to large numbers of people whose identities we know, we can quickly generate enough signal to correct for biases and ensure sampling is done properly. We’re partnering with faculty from the University of Maryland to expand this survey globally, and the team at Carnegie Mellon is building an application programming interface, or API, that will let researchers everywhere access the results. We’re hopeful that this will help governments and public health officials around the world who might not otherwise have this kind of precise data to make decisions in the weeks and months ahead.”

While some countries successfully scaled up their testing capacity quickly to combat the virus before it spiraled out of control, others (including the United States) have not. Therefore, tools such as Facebook’s heat maps and the contact tracing service being developed by Apple and Google will be vital for staying ahead of the spread.

Beyond Facebook’s Data for Good program, CMU also launched its own COVIDcast website that will display survey estimates from Facebook, Google, and other partners. Using all of the data it collects, CMU will be able to “generate estimates of disease activity that are more reflective of reality than what is now available from positive coronavirus tests alone.” Forecasts for hospitals and health officials will be available within a few weeks.