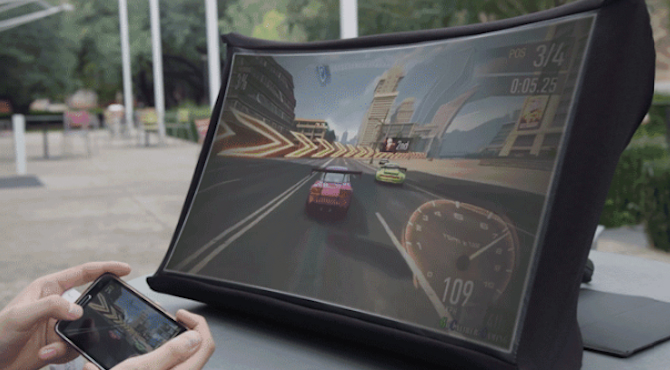 iPhones, Android smartphones, tablets, and laptops all have great displays, and every year brings a few new screen innovations. But they can only be so big given that these are portable devices you need to be able to slide in a pocket or carry in a bag. What if there was a portable 24-inch computer monitor to take with you on the road. Would you buy it?

DON’T MISS: Is this a reason to worry about the iPhone 8?

It weighs only two pounds, and it opens like an umbrella. It has USB and HDMI ports, which means you can easily plug it into a computer, or connect it to an iPhone or Android phone via a Chromecast or other supported wireless dongles.

Inside the umbrella, there’s a short-throw DLP projector that delivers a 720p display at up to 785 nits brightness. The projector offers battery life of up to 6 hours if you’re happy with just 350 nits of brightness.

The first SPUDs will be delivered in June 2017, assuming everything goes to plan. The monitor will sell for $499 once/if it hits stores, but you can buy it for just $374 on Kickstarter.

As ever, it’s worth remembering with Kickstarter that things can (and do!) go badly, and delays or outright cancellations aren’t rare occurrences with crowdfunding, so buyer beware.