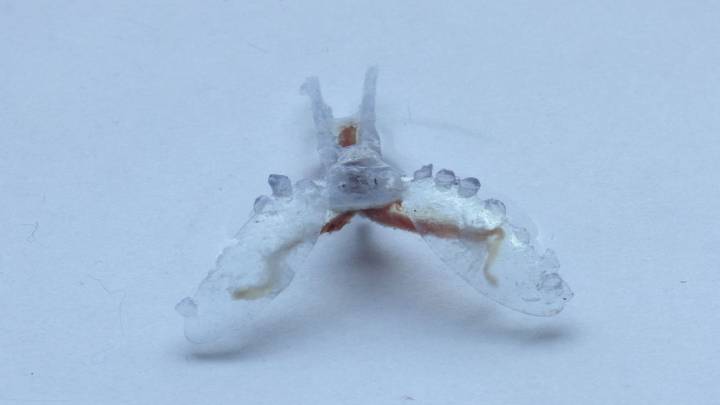 If you’re already scared of the emergence of robots and powerful artificial intelligence, then you’re not going to like the thought of building machines out of living tissue. Scientists have built a functioning biohybrid robot made of living tissue and 3D printed parts, which is an incredible accomplishment. However, the robot prototype can only move at speeds of 0.04cm per minute right now, and it doesn’t yet have the wits that might put us in peril.

A team of scientists from the Case Western Reserve University took the buccal muscle from a sea hare slug and attached it to 3D-printed parts. Electric pulses force the sea slug muscles to contract, and robot can be made to move on command by targeting those pulses.

The scientists chose the Aplysia californica sea slug because the invertebrate is very tough and can withstand various conditions, making biohybrid robots built with its muscles suitable for all sorts of scenarios in water, regardless of salinity or depth. The slug muscle can easily adapt to changing conditions, and the robot is able to continue operating. A swarm of these next-generation biohybrid robots could be used to detect various underwater objects, such as a crash landing site or pollution, as the paper explains.

In the future, scientists hope to add more biological parts to robots, including skin collagen for the robot’s body and ganglia that would deliver chemical or electrical signals to contract the muscles. The idea is that biohybrids could be very cheap to produce, and they would just biodegrade once they outlive their usefulness. Or, you know, they could start multiplying and take over the world.