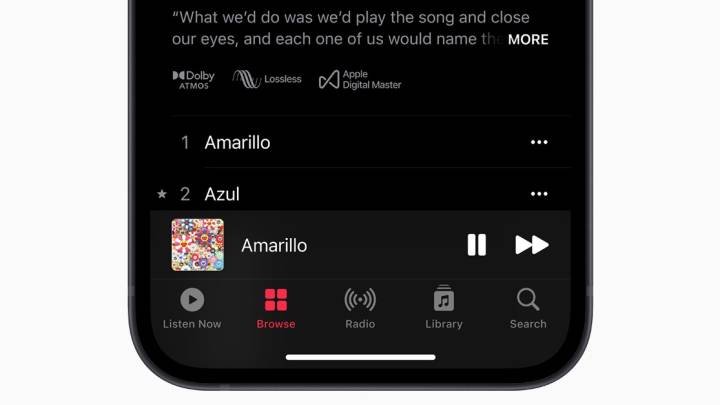 Following a series of leaks hinting at the new feature, Apple announced on Monday that lossless audio will be coming to its entire library of songs on Apple Music starting this June. Apple says that once it launches, subscribers can listen to over 75 million songs on Apple Music in lossless quality. Additionally, Apple Music will also gain support for Spatial Audio with support for Dolby Atmos, and all of these features will be free.

As Apple explains in a new press release, Dolby Atmos technology allows artists to mix their music so that the music sounds like it’s coming at the listener from every direction. Every pair of AirPods and Beats headphones with an H1 or W1 chip will be able to utilize this feature by default, as can the latest iPhone, iPad, and Mac models. Apple will create Dolby Atmos playlists to point subscribers in the direction of songs that take advantage of the feature, and the albums that are available in Dolby Atmos will have a special badge on the detail page.

Thousands of songs will be available in spatial audio next month, but Apple plans to bring lossless audio to its entire catalog. Lossless audio won’t be turned on by default, but you can enable it in Settings > Music > Audio Quality on your iPhone or iPad. Different resolutions will be available based on users’ connections, including cellular, Wi-Fi, or for download. Apple Music’s lossless tier starts at CD quality, which is 16 bit at 44.1 kHz, and goes up to 24 bit at 48 kHz. These are playable natively on Apple devices, but there is also a Hi-Resolution Lossless tier that goes up to 24 bit at 192 kHz and requires extra equipment, such as a USB digital-to-analog converter (DAC).

Here’s what Oliver Schusser, Apple’s VP of Apple Music and Beats, had to say about the announcement:

Apple Music is making its biggest advancement ever in sound quality. Listening to a song in Dolby Atmos is like magic. The music comes from all around you and sounds incredible. Now we are bringing this truly innovative and immersive experience to our listeners with music from their favorite artists like J Balvin, Gustavo Dudamel, Ariana Grande, Maroon 5, Kacey Musgraves, The Weeknd, and so many more. Subscribers will also be able to listen to their music in the highest audio quality with Lossless Audio. Apple Music as we know it is about to change forever.

Apple hasn’t announced an exact date for the arrival of the new Apple Music features in June, but they will probably launch alongside iOS 14.6. Spotify is working on a new tier set to launch later this year called Spotify HiFi, but it was expected to be a premium feature that would cost more money. It will be interesting to see if Apple’s decision to bring lossless audio to its service for free changes Spotify’s plans for its own lossless tier.