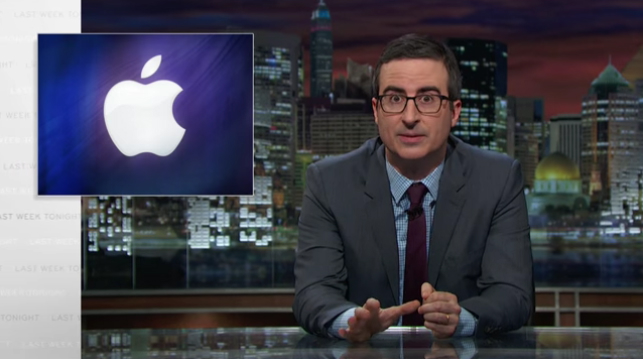 If there’s one tech topic you’ve seen repeatedly discussed over the past weeks, that’s the FBI’s war against Apple’s strong iPhone encryption. The Bureau wants to see what’s on an iPhone that had belonged to one of the San Bernardino shooters with the help of a special backdoor, while Apple wants to avoid creating such a tool, which weakens the security it offers to customers.

The two sides are embroiled in a conflict that will have repercussions in the future on the way Internet companies handle encrypted communications, and on legislation to regulate encrypted devices and services.

According to a recent study, public opinion is divided. Some say the FBI is right while others side with Apple. Yes, the FBI is right to want access to information that might help with a high-profile investigation that involves suspects who were linked to terrorist organizations. But Apple is also right to defend its security and to argue that weakening encryption is not the way to go.

Oliver explained the complicated case, arguing both sides of the table – so if you still don’t understand why Apple and the FBI are duking this one out in Congress and courts, you definitely should see the video. The 18-minute clip is peppered with hilarious remarks, but as usual, Oliver focuses on a very real problem and explains the various nuances of the matter.

Oliver even somewhat agrees with Trump for once on the fact that the FBI is right to want access, though he explains that breaking encryption for one device is bad for Apple’s customers and for the country.

One backdoor could spell trouble in the future as Apple would not only have to comply with similar requests – the FBI did say that a victory in the case would set a precedent favoring law enforcement agencies – but also fight hackers who’d likely hunt down the backdoor and use it for malicious purposes.

“[Whatever] happens in this case will have ramifications because the FBI ultimately wants Apple and the entire tech industry to have its encryption always be weak enough that the company can access customers data if law enforcement needs it so it might be the iPhone today an Android phone tomorrow and a blackberry the day after that assuming that the day after that is in 1998,” Oliver said, hilariously trolling BlackBerry.

Furthermore, countries like Russia and China would also want similar access if the U.S. government wins its case against Apple.

Even so, people who need to encrypt their devices would still have ways to do it. As Oliver explains, more than 800 different communications apps offer encryption support, almost two-thirds of which are made by companies headquartered abroad.

The clip ends on a humorous note, showing a proposed commercial for Apple products that have security and encryption as their main advertised features.