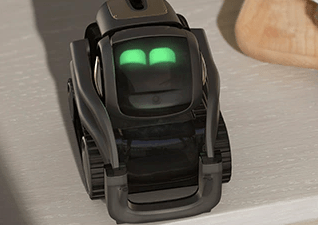 Who among us isn’t a sucker for a cute robot you can play games with, that you can ask questions and that beeps like a pint-sized R2D2? Robotics startup Anki is certainly betting a large number of people fall in that category — and, indeed, will fall in love with the company’s new home robot companion Vector, a sibling of sorts to Anki’s previous Cozmo robot.

Anki has sold more than 1.5 million to date of the latter, remarkable considering Cozmo is an adorable $180 toy comparable to a real-world Wall-E with limited functionality. Here’s how Anki president and co-founder Hanns Tappeiner describes Vector, which will cost about $250 and ship in October.

“Vector is a sophisticated product featuring top-notch technology,” he writes in a blog post announcing Vector. “With Qualcomm Technologies’ connectivity, an ultra-wide field of view HD camera, infrared emitters for added sensitivity, and capacitive touch, Vector is the full package. In addition to cutting-edge tech, we’ve equipped Vector with a friendly, life-like personality because we believe the future of robots is more than just the best technology. The future of accessible home robots hinges on EQ (emotional quotient) as much as IQ.”

Anki is kicking off a 30-day Kickstarter today that runs through Sept. 6. Backers, among other things, will get a Vector unit at a discounted price, in addition to getting the opportunity to help shape Vector’s future development.

In terms of what Vector can do, you “wake” him up with a “Hey, Vector.” At that point, he listens for any number of simple prompts from you, like asking about the weather, questions about things like the time or the news, taking a photo or playing simple games with you. He has touch sensors and an accelerometer, so he’ll know when he’s being touched and can “respond” to that, he can identify people and remember faces, and he sports a four-microphone array for directional hearing.

Vector also has a high-res color IPS display, and his tech is rounded out by a 6-Axis IMU and a WiFi connection.

“Vector’s integrated HD camera has 120-degree ultra-wide field of view, which he uses to see the room he’s in, identify people and objects, and detect motion,” the Kickstarter page explains. “Vector also uses an infrared laser scanner to track distance between objects and map his environment as he explores, and a four-microphone array that can pinpoint positional audio. These and other sensors provide the inputs that drive Vector’s emotion engine, with each data point influencing whether he is happy, sad, curious, or any other emotion.”

When he detects his owner, for example, Vector shows excitement. When he detects a sound behind him, he’ll whirl around to check it out. If his owner pets his backpack, which is where the capacitive touch sensor is positioned, he’ll relax. “And if his drop sensors detect the table’s edge, he’ll be momentarily surprised — then remember that area as a boundary before he moves to another area to explore. This system of movement, exploration, and emotional stimuli form a foundation that we apply Vector’s personality to.”

Here’s a link to Vector’s Kickstarter page. And here’s the tweet Anki used to announce him to the world today: