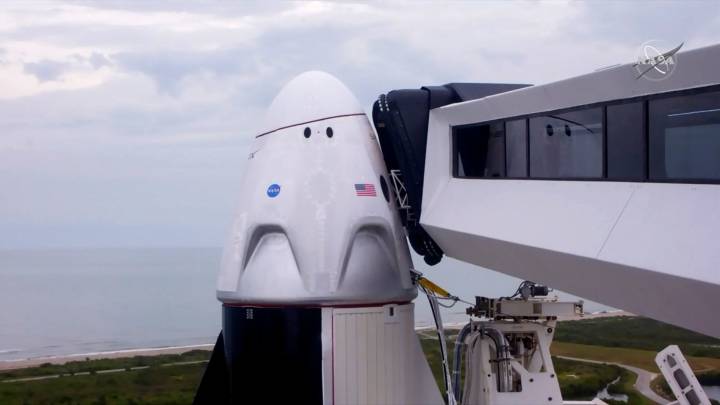 NASA and SpaceX are teaming up for another launch to the International Space Station. The SpaceX Crew Dragon was scheduled to ferry a team of four astronauts from Earth to the ISS on Thursday, but a statement from NASA reveals that things have been put on hold for a least a day. The culprit? Weather, of course!

The launch is a big deal for NASA but an even bigger deal for SpaceX. The company has been performing a steady stream of Falcon 9 launches recently as it continues to build its Starlink communication satellite horde in Earth orbit. Unfortunately, things haven’t been nearly as positive for its ongoing Starship project. The Starship prototypes have repeatedly failed to land as designed, and have made an unfortunate habit out of exploding on the ground or shortly before landing. Reminding everyone what the company is capable of by hauling a crew of scientists into space would be a nice morale boost for SpaceX and its fans, but now it looks like we’ll have to wait until at least Friday for that to happen.

The fact that SpaceX is even launching astronauts at this point is a credit to its work in developing its Crew Dragon capsule and the Falcon 9 rocket family. Crew Dragon was one half of NASA’s Commercial Crew program and it was competing with Boeing’s Starliner to be the first crew-capable vehicle to launch from U.S. soil since the Space Shuttle era.

Early on, many analysts and industry talking heads believed Boeing would beat SpaceX to the punch, delivering Starliner ahead of Crew Dragon. Boeing has decades of experience working with NASA and it seemed like a sure thing. However, as delays began to mount for both the Starliner and Crew Dragon it quickly became clear that Starliner was well behind SpaceX’s spacecraft. SpaceX eventually passed through the uncrewed flight phase as well as a crewed test flight and then a formal mission before Boeing could even complete its uncrewed test trip to the ISS.

Boeing tried, of course, but failed to reach the ISS due to a glitch with the spacecraft’s internal clock that led it to burn far more fuel than it should have. The spacecraft burned so much extra fuel that it didn’t have enough to make it to the space station and had to return back to Earth. Based on the latest reports it looks like Starliner won’t take a crew into space until 2022 at the earliest.

Meanwhile, SpaceX is gearing up for another crewed mission and would be launching it tomorrow if it weren’t for some bad weather that came out of nowhere. Instead, it looks like NASA is planning on Friday for a launch that will take place at 5:49 a.m. EDT. That’s bright and early, so if you want to see SpaceX continue to make history you’ll need to be up early with a steaming cup of coffee.