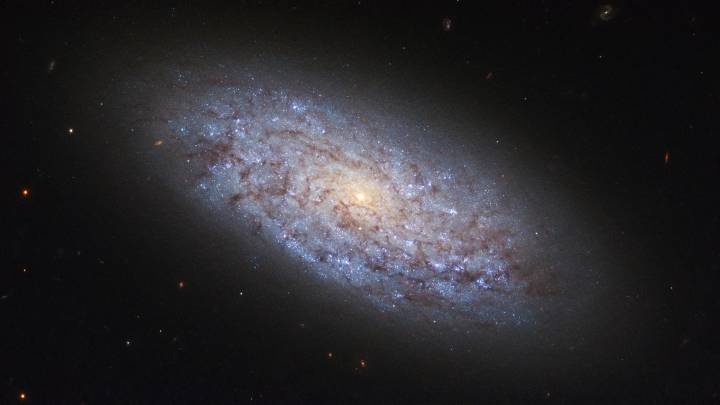 Size is entirely relative, so to say that the galaxy named NGC 5949 is “small” is a bit of a joke, especially once you’ve gotten an eyeful of this truly stunning snapshot taken by the Hubble Space Telescope. The swirling mass of gas, stars, and planets is larger than anything you could really imagine, but when compared to other galaxies — including our own relatively small Milky Way — it’s downright adorable.

The Milky Way, which our Solar System calls home, is thought to be roughly 100,000 light years across — though recent research has called that into question — and that sounds extremely large. Compared to NGC 5949, it definitely is, as the tiny galaxy is thought to have a mass of only about 1% of the Milky Way’s.

Zooming out even further, if you were to compare the Milky Way to the goliath Hercules A galaxy, which is estimated to span 1.5 million light years from one end of its mighty jets to the other, a place like NGC 5949 seems quaint. It’s comparisons like this that allow NGC 5949 to qualify as a dwarf galaxy, which is a classification based on the number of stars it is presumed to hold.

Awe-inspiring size aside, the puny galaxy still shines up nicely in Hubble’s impressive photo, and it offers plenty of eye candy. Hanging out a distance of about 44 million light years from Earth, it’s not exactly a place NASA plans on visiting any time soon, but it definitely puts on a show for us all the same.