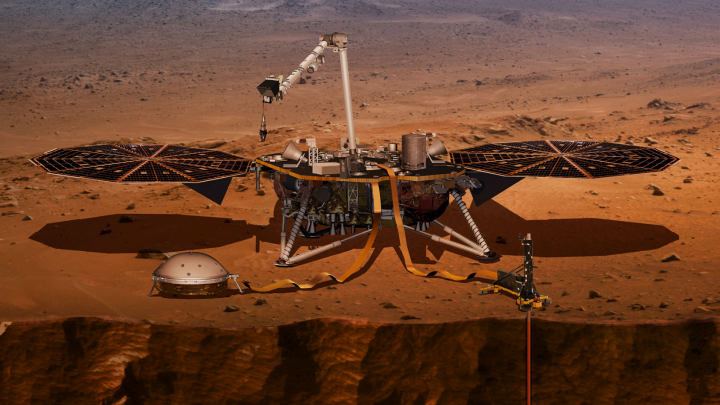 NASA is just a couple of days away from the launch of its next mission to Mars. The “Interior Exploration using Seismic Investigations, Geodesy and Heat Transport” mission — which goes by “InSight” for short, because who wants to say all that? — is scheduled to launch on Saturday, May 5th. Today, however, is the pre-launch briefing press conference, which includes a bunch of the scientists and engineers involved with the project, and if you’re itching to learn more about how this new trip to the Red Planet is going to play out, you can watch it live right here.

The InSight mission has many goals, but its primary task will be to peer inside of Mars and relay data that will reveal the interior makeup of the planet. It’s the first piece of NASA hardware capable of gathering these kinds of observations, and scientists are hopeful that it will provide valuable insight (no pun intended) into the geography of the Red Planet, as well as the “marsquakes” that regularly shake the surface.

The InSight lander is equipped with a number of sensors, including a seismometer which it will use to detect shaking and tremors. “A seismometer is like a camera that takes an image of a planet’s interior,” Bruce Banerdt of NASA’s Jet Propulsion Laboratory, and principal investigator of InSight explained back in March. “It’s a bit like taking a CT scan of a planet.”

Today’s pre-launch briefing will allow the researchers and engineers to explain more about the mission and its list of goals. A huge list of mission contributors will be on hand to answer questions and speak at length about the launch, trip to Mars, landing, and subsequent scientific work. The following individuals are expected to be on hand:

The briefing is scheduling to begin at 4pm ET, and will be broadcast by NASA online. You can watch it via the YouTube video link embedded above.