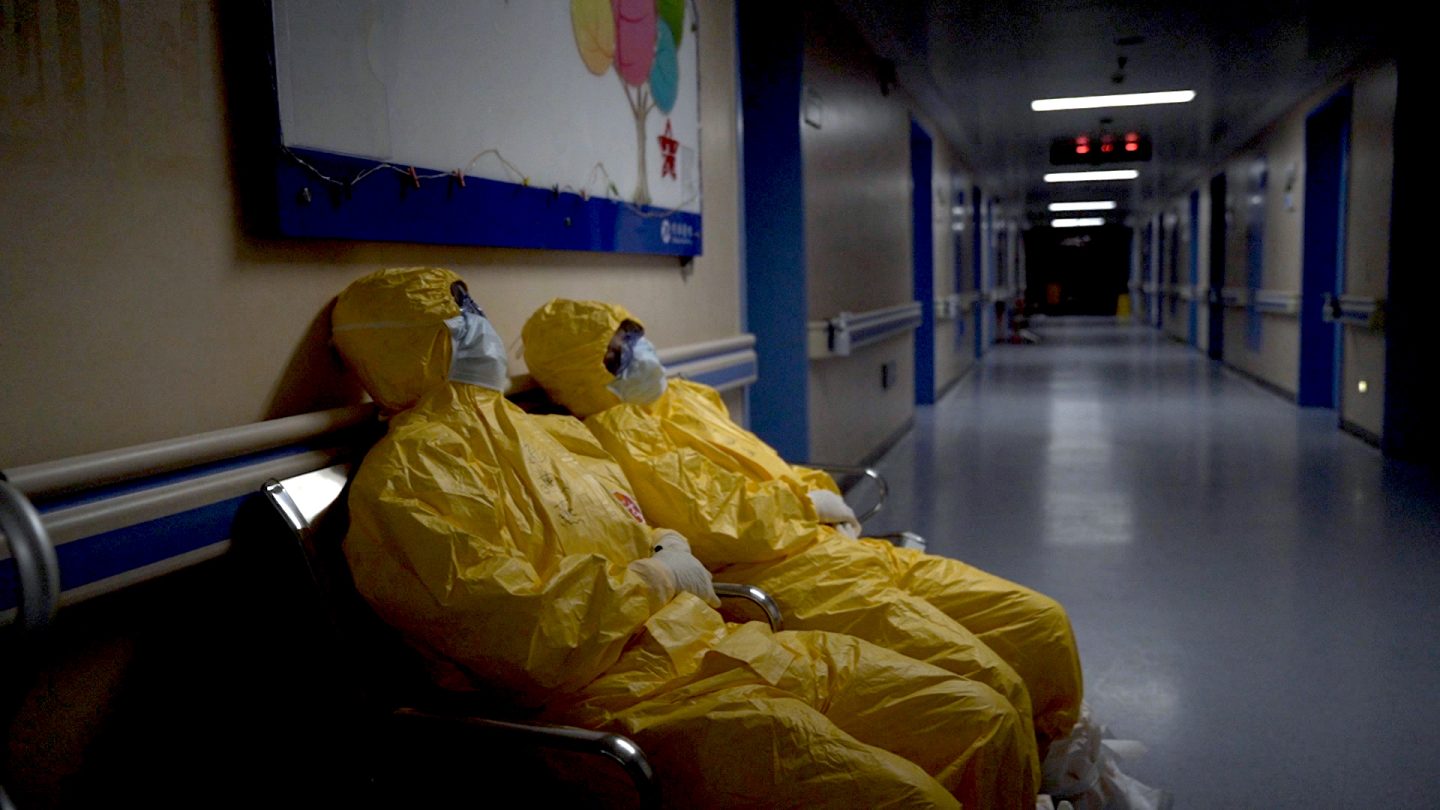 If you’re one of the lucky ones whose life has not been directly touched by the coronavirus pandemic — if yours is not among the US families crushed by the more than 213,000 deaths here from COVID-19 since the outbreak began earlier this year — much of what you know about the virus may be filtered through the prism of the news media. Or maybe it’s the other things that have impacted your life, like your hours at work having been cut; a sign at the corner store apologizing for being closed; friends and loved ones who’ve lost their jobs; the incessant droning of political ads and the election season sloganeering.

When you go from that to actually being confronted with the human cost and misery associated with everything from coronavirus lockdowns to the deadly virus itself, it’s so jarring to experience. That’s how I felt after watching 76 Days, a new documentary about the early days of the COVID-19 outbreak in Wuhan, China, where the virus first originated and from where it first started spreading, to eventually cover the globe. Smarter people than me will, as we draw closer to the end of 2020, prepare the usual lists of the best movies of the year, based on how they performed, how many people streamed them, and all the other usual metrics. However, please allow me to make a case for 76 Days being perhaps the most important movie of this year, and one that you owe it to yourself to watch — all at once, if at all possible, without any breaks or interruption.

For starters, this documentary from New York filmmaker Hao Wu, as well as two journalists based in China (Weixi Chen, as well as another anonymous journalist), offers an important and desperately needed counterweight to the rhetoric about China which has blanketed the US for much of 2020. If you didn’t know any better, and depending on which news sources you pay the most attention to, for example, you might be under the impression that COVID-19 was some kind of purpose-built concoction manufactured in the shadows at a laboratory under the auspices of Chinese leaders who intended to sicken millions of people, including many of their own countrymen.

In press notes that accompany 76 Days, Wu explains that he had flown to Shanghai from New York for Chinese New Year. He could already tell, even then, that something unprecedented was going on. “I flew back to New York before the US closed off air traffic from China. I grew angrier still when my grandpa was diagnosed with late-stage liver cancer soon after Chinese New Year, and passed away a month later. I was unable to say goodbye to him in person because by that time, China had begun restricting inbound travel.”

The documentary that he and his colleagues ended up making follows the 76-day lockdown of Wuhan, a Chinese city of 11 million people, and is focused on four hospitals. The footage is raw, almost unwatchable at times in its depiction of human suffering, but it absolutely must be seen.

In the clip above, the chaos and bedlam inside one Wuhan hospital is visceral. Desperate patients have gathered outside a hospital door, crowding and trying to push their way in. The medical staff keeps raising their voices and demanding that people stay back, their voices cracking here and there from the pressure and stress. Watching this scene in full, my stomach dropped, because you feel like this is all completely untenable. Everyone has a breaking point, and you feel like you’re watching people reach theirs, in real time.

Right before the scene in the clip above, it’s also worth noting, the documentary shows a close up of a door handle at the hospital. It begins to turn back and forth. Someone is outside, trying the knob, turning it harder and faster, frantically trying to get inside. It feels so inadequate to make this comparison, but it’s like a scene from a sci-fi or horror movie. Only, in this case, the virus is real — and so are the living and the dead.

One of the hardest parts of 76 Days to watch is actually the very beginning. Medical staff in the hospital are gripping one of their female colleagues by each arm, knowing that if they let her go she will run after her father — she’s just discovered his corpse is being taken away.

“Let me see my papa for the last time!”

They hold her and try to keep her calm. Her head is bowed.

Her colleagues stand around her in silence. She bowls over, sobbing hysterically. “Screaming won’t do you any good. What if you pass out?” one of her colleagues tries to reassure her. “We don’t want to see you in distress or pain. What will we do if you fall sick? We all have to work in the afternoon.”

Her wailing continues. “I’ll never see my papa again! I want to listen to my papa sing.”

And that’s all in the first three minutes of the movie.

As the rest of the documentary unfolds, we’re put right into the thick of things, amid the terrified hospital staff. They try in vain to maintain order and an efficient flow of patients, but the influx never ends.

We become accustomed, slowly, to the cacophony of voices and beeps from machines.

“Everyone conserve your energy. All these benches are for us to rest on. Rest while you can. They will let patients in slowly. Let’s not panic, okay?”

Go to bed number eight, one patient is told.

“Please cooperate!” the staff yells to a restless crowd trying to barge in to obtain treatment. The situation seems to be deteriorating rapidly.

There’s just so little time. You’ve hardly processed one scene playing out before the documentary moves outside. We see workers fumigating an apartment, while a loudspeaker blares in Wuhan: “Stay home unless absolutely necessary. Strictly follow regulations and rules. Don’t fabricate, believe or spread rumors.”

Back in the hospital, one patient is gently scolded for doing what we all do here — Googling our symptoms and checking the internet whenever we feel ill. “Don’t search on Baidu. Listen to your doctors,” she’s told.

Cell phones ring. And ring. A plastic bin comes into view, with a slew of phones stacked inside. Phones from hospital patients who’ve died from COVID-19.

One of them shows 31 unread messages.

“Perhaps when the epidemic is over, we’ll find a way to return them to the families,” a hospital worker wonders out loud, to no one in particular.

76 Days captures the abject terror associated with the pandemic in Wuhan, because at that point, remember, they didn’t have the benefit that we do of other peoples’ knowledge about the virus. They were chasing a ghost. They knew it was there, but they didn’t have the complete picture at first. They barely understood what they were even looking out for.

One old man in his 70s who’s being kept in the hospital is shown often in the movie. He keeps wandering around, trying to leave, to the consternation of the staff. ‘Grandpa, you’re always sneaking around … Only you are ‘special,’ no one else does this.”

If he keeps doing this, another staff member declares in frustration, “we should initiate ‘that process.'”

Later on, we see that same old man, who was a fisherman, curled on his side, laying in a hospital bed. “I don’t want to live anymore. I have one foot in the grave already, what does it matter.”

The son scolds his father: “You used to be a Communist party member, but look at your actions now!”

“I am still a party member!” the old man barks back at the son. “What does that have to do with anything?!”

Then you need to be a model. Like you used to.

You are driving the doctors crazy with your crying.

He implores the doctors to take the phone away. He starts crying again.

At another point in the movie, we see a nurse disinfecting patients’ ID cards with a spray bottle. Oh dear, she laments — this man was only 60. “What a pity.”

She keeps wiping the cards.

“Rich or poor, revered or despised … fate befalls all,” she says. “What a tragedy. Nobody can escape.”

Later on, when you see the one young couple who come to the hospital so the woman can give birth, it’s almost too incongruous a scene to believe. So much pain around them in the hospital — the makings of a health care catastrophe that will soon plunge all of humanity into a pandemic — yet here they are, their faces pressed up against a hospital door window, waiting to see a nurse bring their tiny newborn daughter to them from the nursery after having been delivered and cared for according to COVID-19 protocols.

I hope she’s pretty, the mother pleads. She hadn’t been able to get a good look at her right away.

That’s all you can think about right now? Her husband gently ribs her.

The nurse places the girl in the mother’s hands. She stares at the child and starts crying, because her newborn daughter is beautiful.