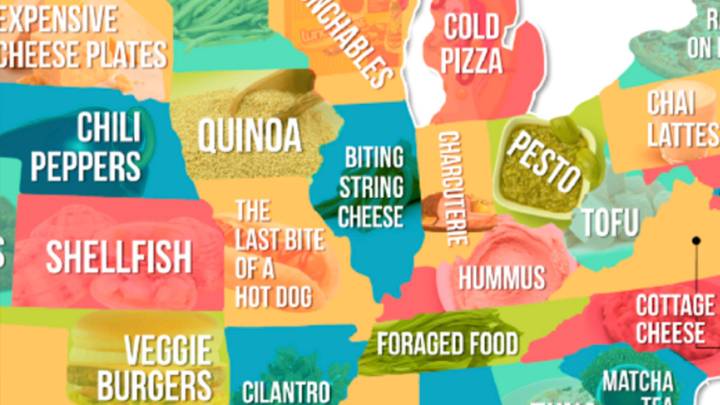 It’s no secret that taste in food can be a regional thing. There are areas of the United States that are well-known for their barbeque prowess, while some cities are incredibly proud of their pizza-making skills. Apparently the same is true for disliking certain foods, and data gathered by the data app Hater reveals what food or type of food each state in the country hates the most.

Hater is a dating app that matched people based on what they hate, rather than what they like. At the very least, it’s an interesting twist on the dating app formula, and after polling over a half million of is users for their most-disliked foods, the app has gathered enough data to make some broad assumptions about the dislikes of each state. Sort of.

I say “sort of” because you’re going to look at this map and see a lot of things that make sense — dislikes of things like licorice or cilantro aren’t exactly uncommon — but you’re also going to see some foods that are so vague in their description that it’s hard to pin down what exactly the distaste stems from.

And so, the map looks like this (full resolution here):

As I mentioned, there’s a lot here that makes perfect sense. Okay so Texas doesn’t like well-done steak (who does??), and Georgia isn’t fond of tuna salad. That’s fine! That’s totally fine. But then we get into some really weird and either oddly-specific tastes, or tastes that are so vague that it’s practically worthless to even consider.

For example, Wisconsin, my home state, apparently hates Lunchables. Now, as a fan of Lunchables I’m both horrified and confused. There are so many different kinds of Lunchables that you can’t possibly say you hate all of them. That’s just silly. Then you have Missouri, which apparently hates “the last bite of a hot dog.” WHAT?!?! What does that even mean? So you liked the entire hotdog enough to eat it but then hate the last bite? Ummmm…

Believe it or not, things get even more bizarre if you venture to the East Coast. It seems that in Virginia, the most-hated “food” is “dabbing pizza grease with a napkin.” Oh, come on! That’s not even food! It’s not even close to being food unless you make a habit of eating napkins, which sounds like a whole other problem that needs to be addressed.

It’s a pretty hilarious list from top to bottom, so go ahead and dive and see what “foods” your state apparently hates more than anything else. It’ll probably be “shoelaces” or something.