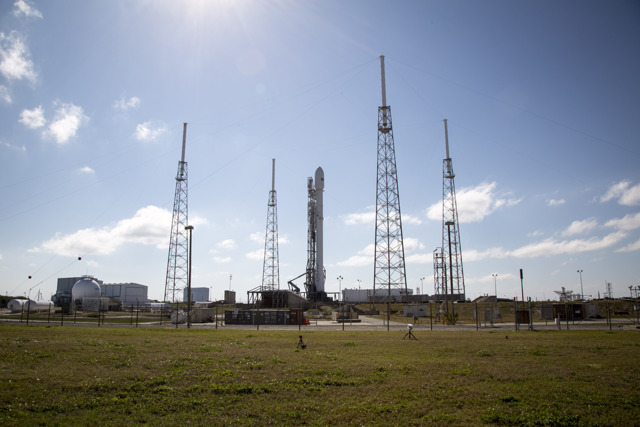 After trying and failing to launch the Falcon 9 rocket four times since late February, SpaceX will once again attempt to send its SES-9 commercial telecommunications satellite into space later today (barring any further complications).

Previous attempts to launch the rocket were foiled by liquid oxygen temperatures, high altitude winds and a boat getting too close for comfort. The winds are a “watch item” for SpaceX once again today, but the launch is currently still scheduled to commence at 6:35 p.m. ET. The launch window extends to 8:06 p.m. if necessary.

“A stray shower may accompany a weak frontal boundary as it nears the Space Coast late Thursday night through mid-day Friday,” the Air Force warned earlier this week, according to Universe Today.

“The front should move through the Spaceport by Friday afternoon, bringing gusty northwest surface winds, which will weaken after sunset. Skies are also expected to clear behind the boundary with only a slight weather concern of lingering cumulus clouds. Maximum upper-level winds will be from the west at 100 knots at 37,000 feet.”

Providing everything goes accordingly, this should be an incredible view of the launch. Clear skies, beautiful weather and, if we’re lucky, no stray boats ruining all the fun for everyone. Stay away, boats!

You can watch the live stream below starting at around 6:15 p.m. ET: