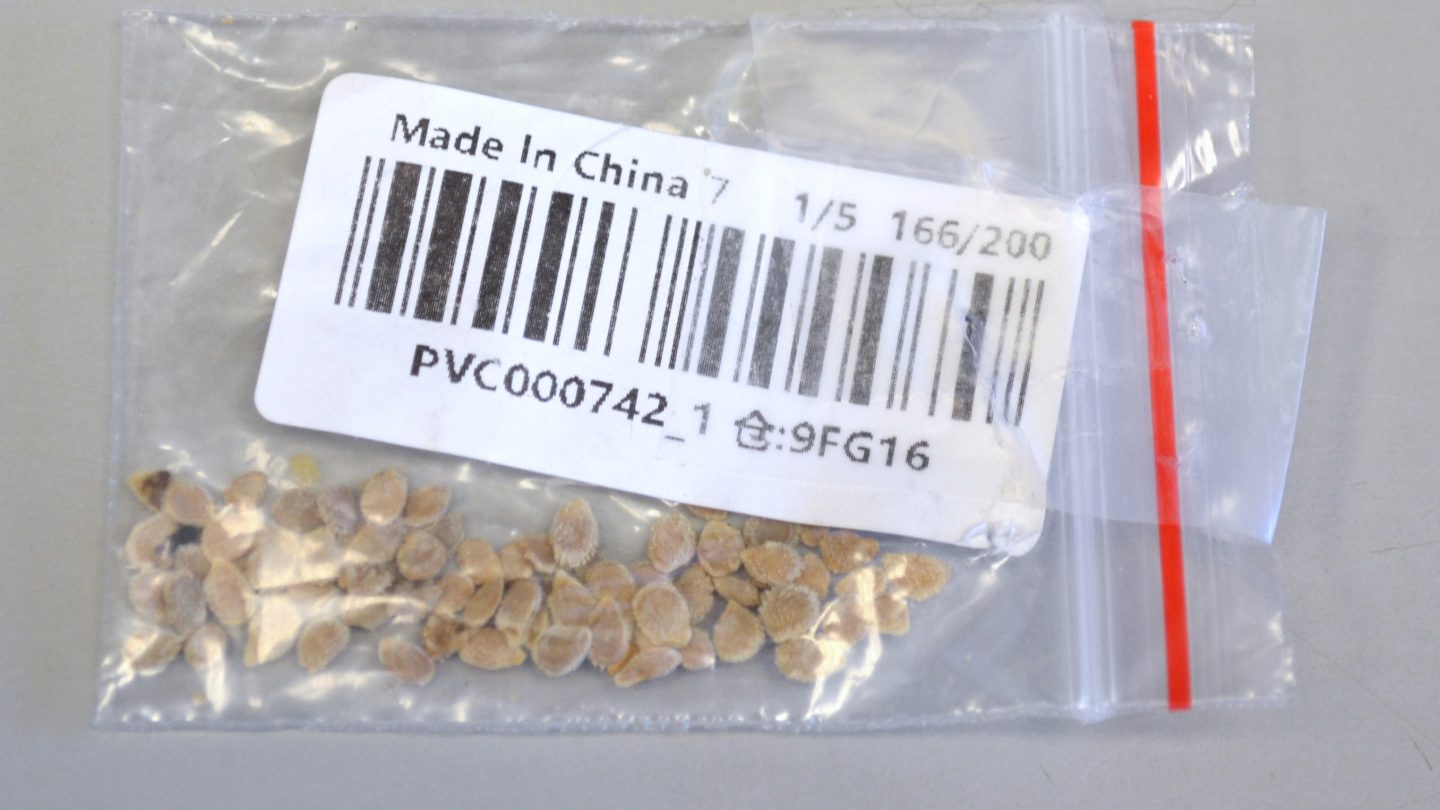 The novel coronavirus pandemic was undoubtedly the biggest and scariest situation of 2020, but it’s hardly the strangest thing that happened last year. There were plenty of odd occurrences in a year that many will remember for a long time. Thousands of Americans received unsolicited seed packages containing mysterious Chinese seeds last year.

We’ve seen plenty of reports on the matter since 2020. People detailed their experiences with unexpected deliveries. It turns out the mystery was bigger than anyone thought. But the USDA gave a simple explanation for it. China didn’t conduct some sort of carefully orchestrated agricultural scam against the US with the help of nefarious seeds, as some might’ve believed. But it was still a scam nonetheless.

An incredibly detailed report from Motherboard shows that thousands of Americans from all 50 states received such packages over the summer, with various agencies investigating the matter. USDA warned the public not to plant the seeds or ingest them.

Aside from the USDA’s Smuggling Interdiction and Trade Compliance group (SITC), the FBI and the Customs and Border Protection (CBP) started investigations of their own. Some of the seed recipients planted them. Others went ahead and ate them.

“I planted them in my hydroponic system in my home, I thought they were the strawberry seeds I ordered from Amazon. They turned Black and green mold, so I threw them away,” one person from Michigan wrote.

While these stories might be scary, they seemed to back up conspiracy theories saying that China is conducting some sort of attack. But authorities that investigated the matter discovered that some of the seeds aren’t harmful. It’s not just one species either, but plenty of known plants, including “rose, amaranth (not Palmer), 2 mints, False Horse Balm, Self Heal, Lespedeza and Sweet Potato,” according to a lab in Utah. New Mexico identified onion, cucumber, tomato, radish, peppergrass, alfalfa, corn, lettuce, hollyhock, and spearmint seeds.

A different person discovered they got seeds for oregano and consumed the resulting crop.

Other seeds are “noxious weeds” that already exist in the US. But people are banned from planting them, according to analysis from New Mexico. Local news departments reported on this throughout the past year.

What’s a brushing campaign and why did they mail seeds?

While authorities had no idea what was going on in the first weeks of shipments, they eventually got some answers. The USDA found that they were a part of a brushing campaign and not actually meant to cause harm. Whether or not they did cause harm is a larger issue. Motherboard explains:

Eventually, the official line became that this was a ‘brushing’ campaign, in which items of small value are sent to people whose online accounts have been compromised, or are sent to people as a ‘gift.’ In order to leave a positive review from a ‘verified buyer’ (which is weighted higher because the person nominally bought and used the product), you need to have actually bought or received an item, so by receiving seeds, reviews from that account or name will be weighted higher.

It’s still unclear who is behind the scam, and what the full purpose was. But the investigation by the USDA closed earlier this year. There haven’t been many reports of mysterious seeds from China since then. If you’ve received seeds in the mail, chances are they are ones that you ordered.

This didn’t just happen in the US

As reported in July of this year, The Atlantic had a deep dive into this scam. There were also seeds sent to the UK, actually before the US.

On the morning of June 5, a woman named Sue Westerdale, who lives in a small town in northern England, posted in the Facebook group “Veg gardening UK” about something peculiar. She had received a mysterious packet of seeds from China, described on the envelope as “ear studs,” and wondered whether this had happened to anyone else.

Reporting found that Facebook groups were a premiere way that people shared that they received these seeds. That spread to the US too. Groups such as the Louisiana Department of Agriculture and Forestry’s Facebook page or the aforementioned “Veg gardening UK” were flooded with messages.

Coronavirus concerns for the seeds from China

The fact that this occurred amidst a global pandemic heightened the apprehension. People were worried that there were targeted biological attacks on the world. Nobody can blame them either. After thorough investigations though, it seems as though the timing is more to do with the compromised Amazon accounts, rather than a pointed attack.

Hopefully, this is the last we are all hearing of this for a while. But it is possible that this could keep happening.

Forbes dove into this subject back in 2017. The article discussed Chinese packages showing up in Pennsylvania clearly addressed to people who lived at the homes. Hair ties were the subject of the story then. But the author noted that the new landscape of cross-border shipping opens up plenty of avenues for scams.

In a world where goods can virtually be sent anywhere more or less freely, borders have become major loopholes for criminals to violate the laws of whatever country they are shipping goods to. For the most part, if the seller of a product is on the other side of an international line than the buyer then no rules, regulations, or laws apply; IP, consumer safety, and postal laws become moot, as the country where the offense originates is beyond the legal reach of the parties seeking retribution. Cross-border e-commerce has become the new “Wild West,” a place where anything goes — even sending random women on the other side of the world piles of unwanted hair ties.

What to do if you get a package?

As if we have seen, this is something that happens more often than we realize. In fact, Amazon users are already being warned for this year. The possibility that they could be receiving unwanted packages this holiday season is high. If you happen to receive something in the mail that you did not order, you should report it to the distributor. For seeds, contacting local law enforcement is a good step to take as well. Do not plant them. You should report it to the distributor and if it’s anything that looks suspicious, contact local law enforcement.

You don’t want your identity to be stolen, so you need to be vigilant when you receive something you haven’t ordered. Also, similar to a suspicious email you may get, don’t give away any of your contact information. This absolutely includes your social security number, phone number, credit card number, and more. Stay safe out there.