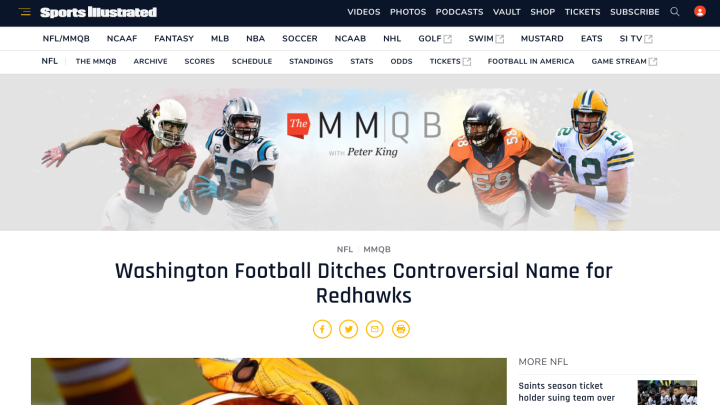 But the story was in fact a very real example of the Fake News Media at work. All the websites those stories appeared on were fakes, set up by Native American advocates to highlight “how easy it would be” for the Redskins to change their name.

The scheme was impressively simple: the group appears to have bought up a bunch of legit-ish URLs, like sportsillustrated.news, washpostsports.com, and ESPNSports.news. The tactic is straight out of the playbook of phishing attacks that try and get users to enter their credentials on a fake banking website.

All the fake sites weren’t just standalone articles, but mimicked key components of the real websites to trick users. The Washington Post’s social bar, for example, sat on the left, and real ads from Sports Illustrated played on the page. The group even set up a fake team page for the Washington Redhawks, using the standard NFL team site template, a decent-looking URL, and a realistic new mascot. Basically, it’s enough to pass first glance for any readers.

Spreading the hoax was even easier: Native American advocates started tweeting links and images at a coordinated time this morning, quickly garnering retweets and Facebook shares that shot across both social networks.

Now, the purpose of the hoax wasn’t to try and trick the media — or anyone — into believing the story was real. Actually, all the fake articles included a tiny disclaimer right below the headline, saying that the websites were a “parody” and linking to the press release.

“We created this action to show the NFL and the Washington Football franchise how easy, popular and powerful changing the name could be,” Rebecca Nagle (Cherokee Nation), one of the organizers of the stunt, said in the press release. “What we’re asking for changes only four letters. Just four letters! Certainly the harm that the mascot does to Native Americans outweighs the very, very minor changes the franchise would need to make.”

The campaign was successful enough that the Redskins had to issue a statement, confirming that the hoax was fake and that it wasn’t going to change its name.

Statement from the Washington #Redskins pic.twitter.com/u3DQJFiFXi