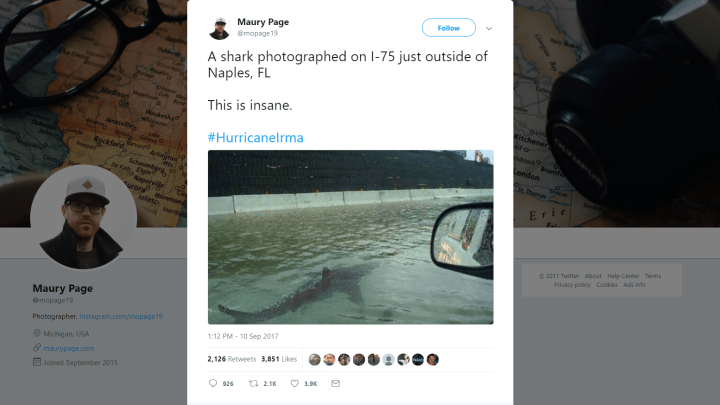 Hurricane Irma swept through mainland Florida last night, wreaking havoc and resulting in some truly devastating photos. But amid all the very real chaos, people are still finding time to share this completely image of a shark supposedly on a Florida highway. It’s the same image that went viral during Hurricane Harvey, and we’re obligated to once again remind you that it’s totally fake.

Snopes chased down the origin of the image, and discovered it’s from a 2005 National Geographic spread, in which the shark is following a kayaker. In 2011, shortly after Hurricane Irene hit Puerto Rico, the shark appears to have been Photoshopped from that image into a picture of a flooded highway.

Since then, the shark-on-a-highway image has appeared any time a highway has flooded in a vaguely tropical region. It went viral during Hurricane Harvey, and it’s reappeared during the media aftermath of Hurricane Irma.

It went particularly big after @mopage19, a Twitter account for a self-proclaimed photographer, tweeted it out yesterday afternoon. Looking through his more recent tweets, it looks like it might’ve been tweeted ironically, but it sure wasn’t interpreted that way. The picture has swept through Twitter and Facebook, and is popping up as real. Once again, it is not.

Sharing a fake image of hurricane damage isn’t just a sleazy way to get faves, it can genuinely hamper the spread of legit information and mislead people about what really happened during the hurricane.