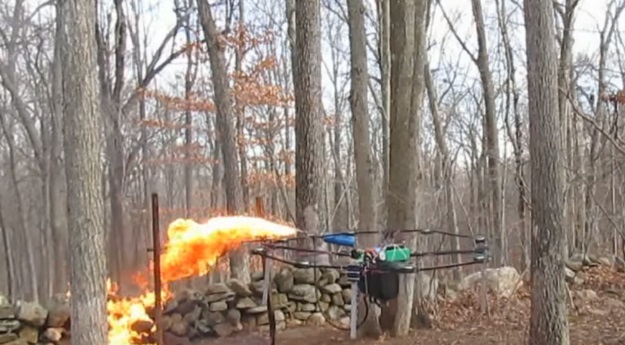 Remember that insane YouTube video from this past summer which featured a working gun attached to a drone? Well, the crazy mind behind that idea is back with something even more ridiculous and dare we say insane — a drone attached to a full-fledged and completely functional flamethrower.

Posted by YouTube user and all around drone enthusiast Hogwit (real name, Austin Haughwout), the video below shows the Connecticut teenager maneuvering a flamethrowing drone in a forest and actually using it to roast a turkey.

For anyone understandably worried about safety, WTNH News caught up with Haughwout’s father who explained that the entire video was filmed with safety measures in place.

News 8 spoke with Haughwout’s father who said the flame throwing turkey roast was done safely. He said there were buckets of water, fire extinguishers, and hoses nearby. He also said the area had been cleared of extra leaves prior to firing the drone up.

Still, not everyone was on board with this rather absurd stunt. Speaking to WTNH News, drone advocate Peter Sachs said: “Anyone who does anything of this nature or a similar nature is operating unsafely and irresponsibly, and I certainly would not condone it and I would certainly chastise it as would any responsible operator.”

We’re certainly inclined to agree in this case. If you fast forward to the end of the YouTube video, it’s almost shocking that an entire forest fire didn’t spring to life. Given the intensity of the flames, it’s not unreasonable to assume that the Haughwout’s collection of water buckets, fire extinguishers and hoses could have helped much if the fire spread out of control.

As for any potential legal ramifications, recall that the FAA previously ruled that Haughwout’s gun firing drone didn’t break any laws. That being the case, perhaps this flamethrowing contraption would fall into the same category.