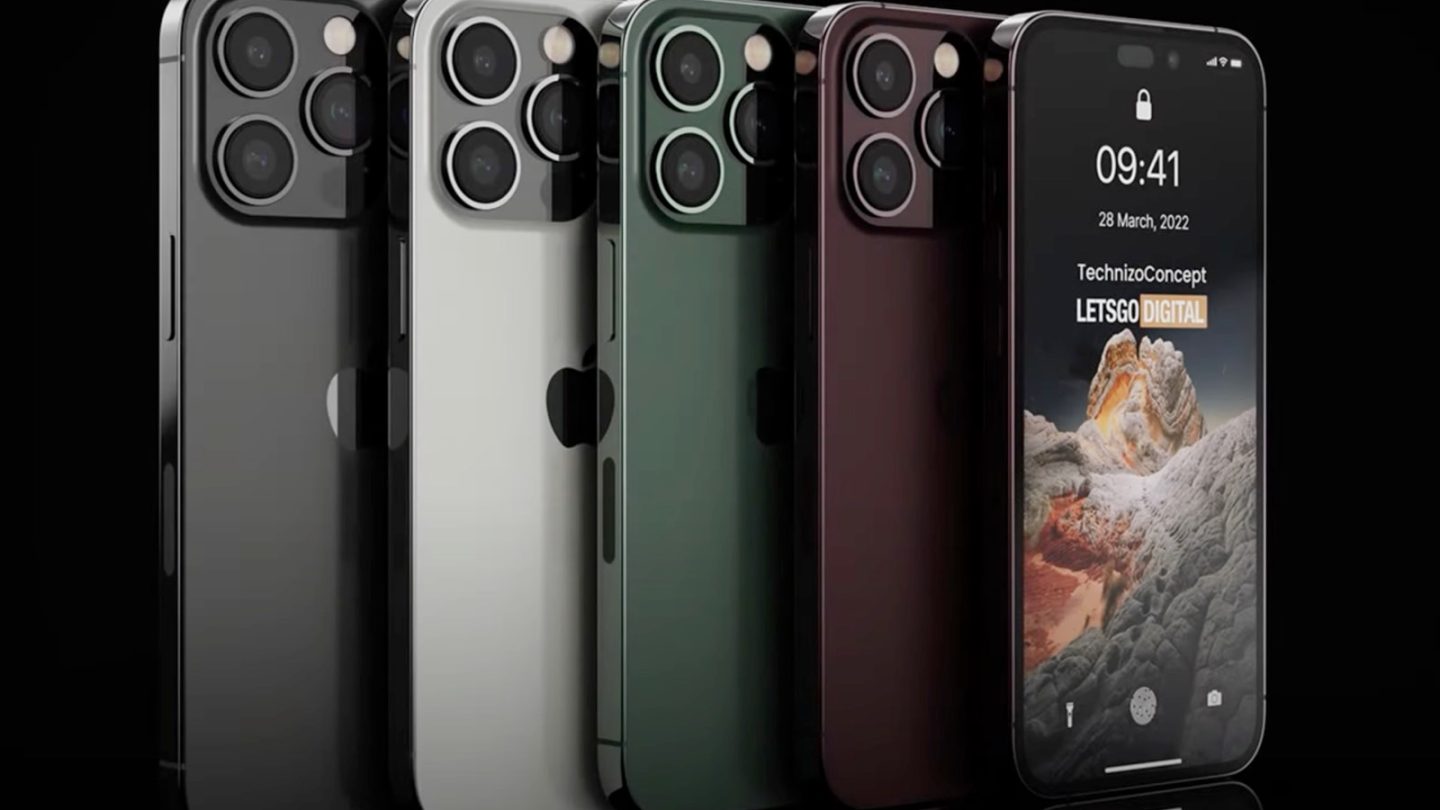 The iPhone 14 Pro Max isn’t due out until later this year, but rumors are already flying.

While many fans expect Apple to launch future-impossible tech, many constantly peruse YouTube, desperately searching for news on the upcoming iPhone models.

That said, Apple has yet to give an official statement on the release date of the next iPhone models since the company does not pre-announce products.

The current iPhone, the iPhone 13, is still very much in vogue. However, we have scoured the rumors, the news, and the internet to put this article together to highlight the iPhone 14 Pro models.

You should find most of the answers to your questions about the iPhone 14 Pro Max here, and if not, reach out to me so we can add it!

We’ll be updating this article regularly with news from credible sources on the upcoming smartphones. So make sure to check back to avoid missing out on exciting updates.

Bloomberg tech reporter Mark Gurman said that only the iPhone 14 Pro models would get the rumored A16 chip.

This means the other standard iPhone models would still maintain the A15 Bionic chip currently found in the iPhone 13.

So, if you want the top-of-the-line flagship iPhones experience, you should aim for the iPhone 14 Pro models.

Gurman sealed this claim with the fact that Apple has decided to focus more on the M-series silicon chips for Macs.

We matched the past release dates of the previous iPhone models with rumors from credible other sources.

We speculate that the iPhone 14 Pro models should be due for release between mid-September and late October.

Additionally, we anticipate the pre-orders of the new iPhones to begin that weekend.

How much will the standard iPhone 14 Pro Max cost?

It is rumored that Apple will replace the “Mini” smartphones with a 6.7-inches iPhone 14 Max and still maintain the standard phone price.

@TheGalox, a popular tech tipster on Twitter, tweeted that the iPhone 14 Pro models will be $100 costlier than their predecessors.

If these rumors turn out to be true, chances are that you would be caught opting between getting a MacBook Air M2 or an iPhone 14 Pro Max! Well, maybe.

Because Apple has yet to make an official statement on this, it’s best to hope for a more affordable iPhone 14.

Pro Tip: Check out our iPhone 14 vs. iPhone 14 Pro article to understand the differences between non-pro models and justify the price range.

The rumored iPhone 14 radical design has caused a huge stir among Apple fans and other tech geeks online.

While it is true that Apple’s official statement is yet to be released, we have Apple leakers that, over the years, have proved to be accurate in dishing out credible leaks before the Apple event.

Ming-Chi Kuo, one of the most reliable Apple analysts, had earlier claimed that the iPhone 14 Pro and the Pro Max version would feature significant upgrades in their designs.

According to another accurate Apple leak source, Jon Prosser, the upcoming devices would be void of the unsightly notch feature.

Read our new leak that could be the best look at the iPhone 14 and iPhone 14 Pro’s design.

Some other rumors suggest that the cutouts might have a wider aperture and would have a larger surface area.

In his unparalleled iPhone 14 YouTube leak, Jon Prosser confirmed that the prototype design of the iPhone 14 he saw from his sources was the iPhone 14 Pro Max which had a punch-hole camera in place of the notch.

Kuo had earlier said that the next iPhone models would be built with a punch-hole on the front camera instead of the usual notch design.

We believe the Pro Max models would be built with a punch-hole in the front-facing camera and a pill-shaped cutout for the other models.

We are not so convinced about the under-display face ID.

While some rumors suggest that the non-pro models may likely have the notch that the iPhone 13 Pro Max carries, Ross Young claims the upcoming Pro models would have both the hole-punch and pill cutout design.

Ross believes that the smaller hole would be the face ID dot projector. In contrast, the pill area would be for the selfie camera.

Although Ross Young, like a few others, is mostly accurate, none of this information has been confirmed by Apple, so maybe relax and hope for more.

From Jon Prosser’s rendered video, he showed us that the glass on the back of the upcoming would be semi-glossy on both the iPhone 14 Pro and iPhone 14 Pro max, with the Apple logo under the glass.

Jon and his team want us to expect the Pro Max model to be without the Camera bump we saw on the previous iPhone 13 Pro Max and its variants.

Comparing this to the iPhone 4, Prosser’s video shows that the upcoming iPhone would have round volume buttons. The standard iPhone device is also said to have a titanium chassis.

Prosser, the only tipster to claim he’s seen a real-life design of the Pro Max version, was not color specific.

Although Jon Prosser did say that he was shown pictures of a gold-colored design, he still said that we should expect unique color surprises from Apple.

The latest Apple news from our rumor sources tells us that of the incoming four iPhone models, only the iPhone 14 Max and its Pro Max variant would have superior battery life.

With a 4,325 mAh battery, the iPhone 14 Max leads the other future brands in battery strength. Followed by the Pro Max model with a 4,323mAh battery capacity.

The other models have a lower capacity, between 3,200-3,279 mAh. In all, the iPhone 13 Pro Max may have a higher battery life compared to the new iPhone models.

If you have read our previous articles, you would be privy to the outlined features expected of the upcoming iPhone.

One of such features worthy of mention in this write-up is the rumored always-on-display support from the iOS 16 software.

Tech analyst Mark Gurman had earlier speculated that the new iPhones would come with an always-on-display. They will also have an enhanced lock screen feature.

Additionally, we have our fingers crossed on the 6.1-inch and 6.7-inch diagonal screen sizes for both the Pro and Pro Max versions.

The screen sizes may not be so different from the iPhone 13. Nevertheless, the screen of the 14 Pro Max might be larger. According to CAD renders, the display bezels are rumored to be 20% smaller.

CAD renders shared this claim via Twitter. In all, it’ll only make sense for the screen display to have better aesthetics than its predecessors.

We also have reasons to believe that the Pro Max model would be 7.85 mm thicker than the present high-end iPhone.

For starters, multiple credible leak sources speculate that the iPhone 14 models are all likely to receive notable camera improvements.

With a wider aperture, more light would stray through the lens of the iPhone 14 front camera sensor. This would provide a better depth-of-field effect for portrait videos and photos.

Also, Facetiming would be more exciting because these camera improvements would enhance the device’s camera focus.

Ming Chi Kuo also stated that the rear camera would get an enhanced 48-megapixel ultra-wide and telephoto lens.

The wide and telephoto lenses could possibly mean that the triple-lens camera on the iPhone 14 Pro models would be larger than their predecessors.

This would make the iPhone 14 Pro Max and Pro version capable of recording videos in 8K resolution.

Jon Prosser’s video showed that the iPhone 14 Pro Max version would not have the camera bump we saw on the iPhone 13 Pro max.

Jon has an accurate track record for always being correct with his Apple leaks and is as excited as many other Apple fans.

Some other rumors also have it that the iPhone 14 Pro and its Pro Max variant have a thicker camera bump. This could be a huge diversion from the main picture Jon Prosser pointed out, but who knows what is right?

We must prepare for surprises from Apple.

Would the Pro models use a USB-C port?

Surprisingly, the lightning port used in the previous iPhones doesn’t seem to be evolving just yet.

Of all the rumors we have combed through, none seem to affirm the adoption of the USB-C port as the new charging port for the upcoming iPhone.

Although we did hear that it may be adopted in the iPhone 15 series, we are pretty sure you won’t be using this anticipated technology just yet.

That said, the iPhone 14 models should still use the lightning port, as confirmed by Jon Prosser.

Kuo stated that the advent of the iPhone devices with mixed reality headsets should probe the industry to speedily upgrade the Wi-Fi 6E specifications.

Competitors would be driven to think in that direction if the headset and iPhone could adopt the Wi-Fi 6E.

Further, Kuo explained that the Wi-Fi 6E is an important factor in providing and maintaining high-speed wireless transmission for VR and AR experiences.

When is the iPhone 14 series release date?

Matching the previous release dates with our in-depth reviews, we believe the iPhone 14 series will arrive between mid-September and late October.

However, Apple has yet to announce an official release date so far.

Yes, most probably. Ming-Chi Kuo has described how the iPhone 14 series would have a better 8k-resolution rear camera of 48 megapixels with a periscope lens.

The front-facing camera would have a wider aperture making it a far better choice for shooting videos and pictures.

Does the iPhone 14 have a charging port?

The iPhone 14 series will still use the Lightning port until further notice.

We have sources that have informed us that you may have to wait till 2023 before Apple introduces the use of a charging port other than the lightning port.

That means the iPhone 15 may be the first Apple iPhone to be built with a Type-C port.

iPhone 14 rumors: Will there be a SIM card?

So, it would be an exciting innovation if the new iPhone 14 phones did not have SIM card slots.

MacRumors reported a rumor in 2020 that an anonymous tip gave away Apple’s decision to ditch physical SIM cards for their upcoming devices.

If this is true, we’re hoping that the iPhone 14 and its counterparts will be launched with this feature.

Apple leaker DylanDKT once tweeted that iPhones had launched preparations to begin producing other future brands without SIM card trays. Speculations on whether this is true or just a hoax rose since Dylan’s account was taken down.

How many cameras does iPhone 14 Pro Max have?

A possible total of five cameras.

These cameras would serve as the main wide-angle, ultra-wide-angle, and telephoto cameras for portraits and optical zoom.

The Pro Max model is reportedly going to have a 6.7-inch screen.

What is the price of iPhone 14 Pro Max in the US?

In the United States, the rumored starting price for the sale of the Pro Max iPhone would be about $1,199

How much RAM will iPhone 14 Pro Max have?

Will iPhone 14 be waterproof?

This means that an iPhone 14 can be submerged 6 meters underwater for about 30 minutes.

This also means that the iPhone 14 series have been built to withstand or survive spills like rain or splashes.

Will iPhone 14 Pro Max have a fingerprint scanner?

Rumor gathers that the iPhone 14 smartphones might arrive with a new under-display fingerprint scanner.