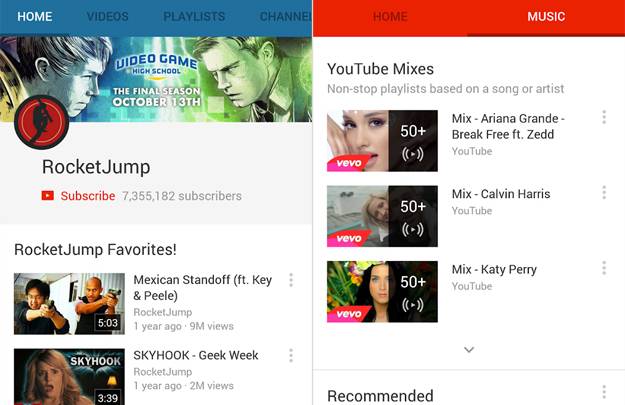 The look and feel of Google’s “Material Design” in Android 5.0 Lollipop is fantastic. We have covered it at length here on BGR — see our review of Google’s Nexus 9 for a good overview. The basic idea is to unify Google’s apps on mobile devices and the web with a bold new look characterized by bright colors and subtle shadows. Material Design also gives developers a set of guidelines to follow that will provide a better user experience in their apps, and the results thus far have been terrific.

Now, Google has finally issued a Material Design makeover for one of the most popular Android apps on the planet, and the results are stunning.

On Wednesday night, Google announced on its Google+ page that the YouTube app for Android has received a huge update.

“The YouTube app for Android is getting a new, cleaner look this week that puts more focus on videos and channels, and looks more like the other Google apps you know and love,” Google wrote. “To make it easier to find the videos you want, we’ve also added search filtering.”

While it will likely be more than a year until the majority of Android users finally get their hands on Android 5.0 or higher, hundreds of millions of users can now get a taste of Lollipop thanks to this great update.

A link to download the new and improved YouTube app can be found below in our source section.