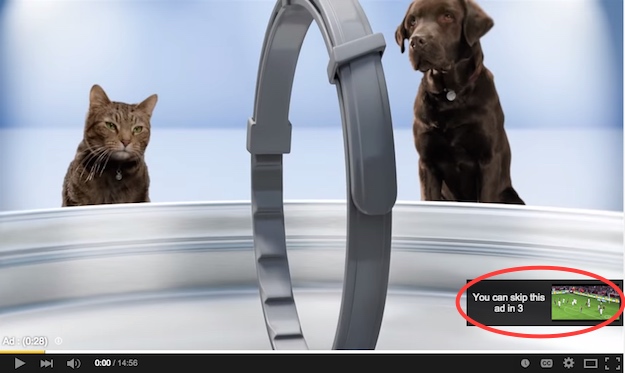 Despite being the third most popular website on the web, Google’s YouTube property still hasn’t quite figured out how to make a profit. Now, in an effort to generate some extra revenue, and perhaps alleviate the frustration of users who can’t stand YouTube pre-roll video ads, YouTube is planning to implement a subscription-based tier with no advertising whatsoever.

News of YouTube’s plans came in the form of emails the site sent out to content partners on Wednesday afternoon. A subsequent report from The Verge relays that the upcoming service may cost as much as $10/month.

It will offer ad-free videos as well as the ability to store videos offline on their mobile devices, for a price expected to be around $10 a month. It will also let creators put their videos behind a paywall so that only subscribers to the premium version can view them, sources said.

Is such a service really worth $10 a month? Are YouTube ads that infuriating? If the $10 price point is indeed accurate, I can’t imagine there are enough users who will find such a value proposition sufficiently appealing as to really generate some real revenue for YouTube. Google must be borderline delusional if it thinks an ad-free YouTube experience should be priced higher than a Netflix or subscription.

The email YouTube sent out to its partners reads in part:

Your fans want choices. Not only do they want to watch what they want, whenever they want, anywhere, and on any device they choose, they want YouTube features built specifically with their needs in mind.

We’re excited to build on this momentum by taking another big step in favor of choice: offering fans an ads-free version of YouTube for a monthly fee. By creating a new paid offering, we’ll generate a new source of revenue that will supplement your fast growing advertising revenue.

According to the terms linked to in YouTube’s email, the program will go into effect on June 15 and will offer content creators a 55% cut of all subscription revenue attributable to a user’s own videos.

I think the larger takeaway here is that YouTube is trying, perhaps desperately, to do all it can in an effort to turn a profit. Though Google’ YouTube division generated upwards of $4 billion in revenue in 2014, the costs involved in keeping YouTube up and running smoothly is hardly a cheap endeavor, with one report indicating that YouTube’s bottom line is “roughly break-even.“