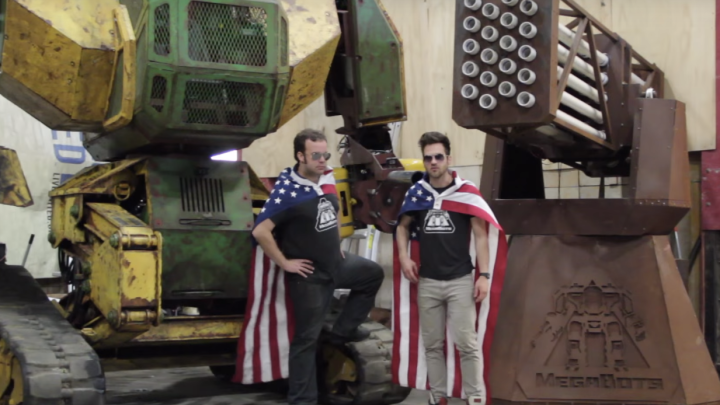 Is there anything that would make you prouder to be an American than seeing an American-built robot defeat a giant Japanese robot in an epic battle? Japan, of course, is the world capital of gigantic robots, which is why defeating them would be such an achievement for American engineers. And all patriotic Americans have a chance to help out our fellow countrymen in this noble endeavor thanks to a new Kickstarter project aimed at funding the toughest, baddest red-white-and-blue robot on the planet.

FROM EARLIER: Here’s what happens to your luggage after you check it in at the airport

MegaBots Inc., the company behind the Kickstarter project, explains that it’s spent the last several months assembling a dream team of engineers to build the ultimate robot.

“MegaBots, Inc. has spent the past month and a half assembling an unbelievable crew to take on Suidobashi Heavy Industries in the giant robot duel,” they explain on their YouTube page. “Grant Imahara, the founders of BattleBots, Peter Diamandis, NASA, Autodesk, Howe & Howe Technologies, IHMC and FonCo Creative Solutions have banded together with MegaBots to build the most American robot ever to take down Japan!!”

MegaBots says that while its current robot champion is powerful, it needs to be upgraded because it will be “slow, top heavy, rusty and not equipped for melee combat” if it goes up against Japan in its current state. To rectify this, it’s seeking $500,000 on Kickstarter to give the robot heavy armor plating, upgraded hydraulics, and improved speed.

Here is a concept of what the robot will look like fully upgraded. Note the awesome chainsaw attachment for its right arm.

As of this writing, the Kickstarter project has already raised over $87,000 with 30 days to go.

Once both robots are completed, they will compete in hand-to-hand melee combat for the honor of their motherlands. Learn more about MegaBots’ project by checking out its Kickstarter page and be sure to watch their video about their massive robot below.