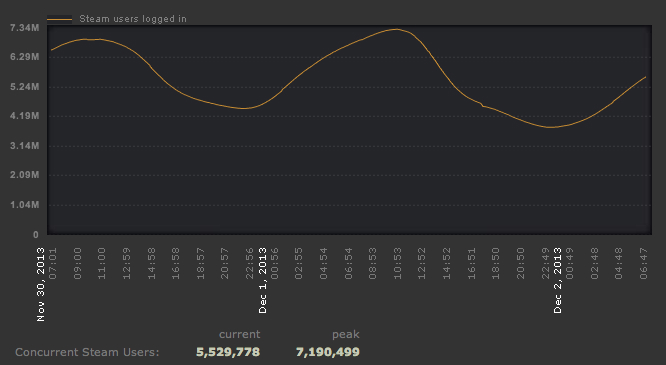 More than 7 million gamers were logged into Steam at the same time on Sunday, a new record for Valve’s platform, which has a total of around 65 million users according to the latest available data. The new number surpasses last year’s record of over 6 million users that played simultaneously on November 25th, 2012, Engadget reports. The new record is particularly interesting considering that Sony and Microsoft have each released new consoles in the past few weeks, the PlayStation 4 and Xbox One, with both devices receiving increased attention from gamers. Over 1 million PS4 units were sold during its North American launch, a number the Xbox One matched during its first day of sales, although Microsoft launched its new console in more markets than Sony.

In addition to gaming, Steam users may have logged in this weekend to take advantage of the company’s Black Friday and Cyber Monday deals, with different titles being discounted at regular intervals.

Valve’s gaming plans are not limited to offering its Steam platform to more desktop users, as the company plans to both launch its own Steam Machine consoles in the future, and support partners interested in selling similar devices. Furthermore, the company will also add virtual reality support to some of the future titles that will be available on its platform.