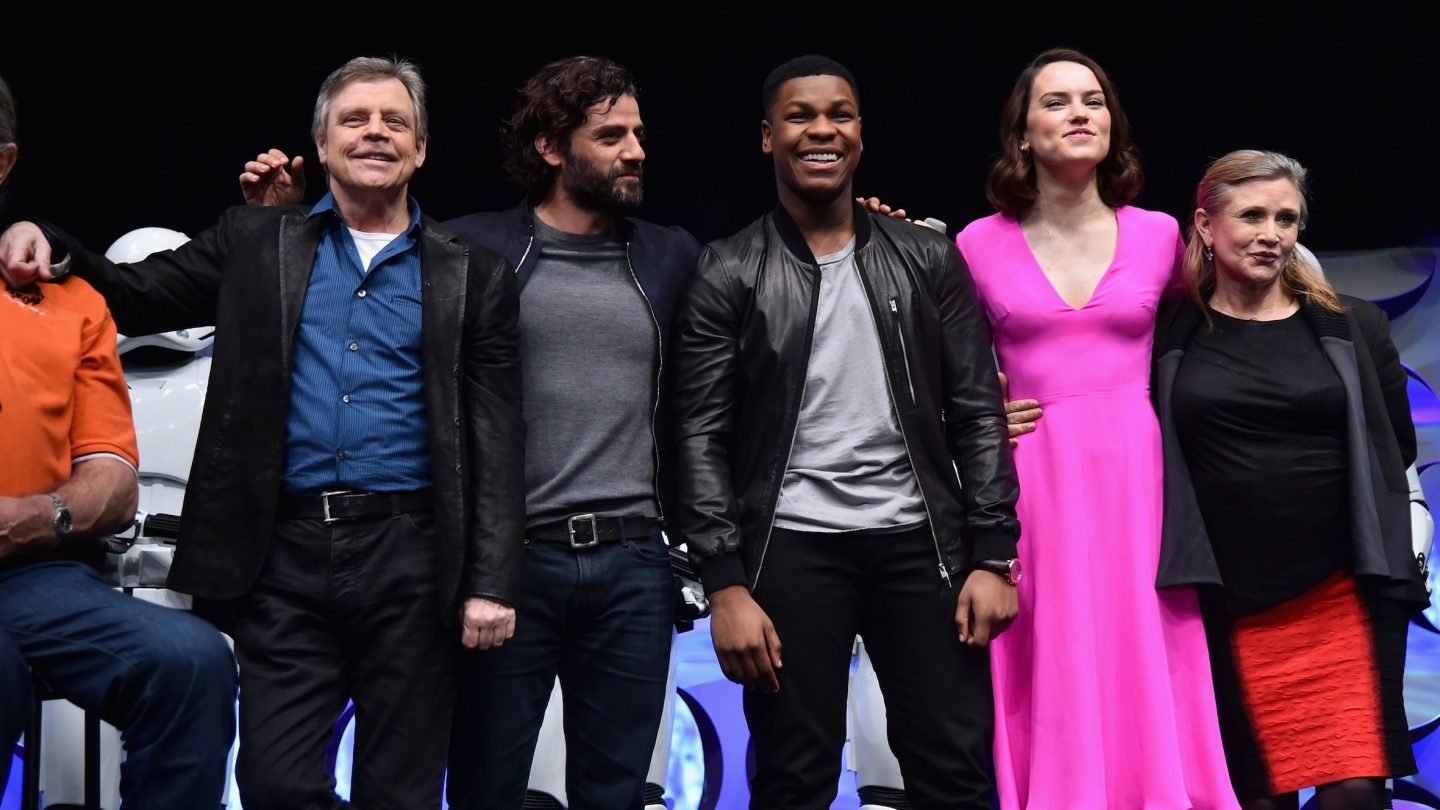 I’m well aware that a trilogy has three episodes, and that Star Wars: The Force Awakens just hit theaters so there are two remaining movies in the third Star Wars trilogy. However, in the next five years we’re going to see five new movies based on Disney’s Star Wars universe, including the untitled Episode VIII (2017) and Episode IX (2019) as well as Rogue One: A Star Wars Story (2016), an upcoming Han Solo spinoff and Star Wars Anthology: Boba Fett (2020). In fact, who’s to say that won’t want to further milk this gigantic cash cow in the future and create additional stories based on our favorite heroes from Star Wars?

Meanwhile, here’s what you need to know about these five upcoming films, at least according to what has been revealed so far.

Episode VII, premiering on May 26th, 2017, is the one movie fans including myself can’t wait to see. The second episode in the new trilogy will bring some much-needed answers about the characters introduced in The Force Awakens.

Rian Johnson writes and directs the movie, Vulture reminds us, and the script is so exciting that J.J. Abrams already said it’s “so good that he wished he had written it.” Daisy Ridley (Rey) said the second episode is “very good,” while John Boyega said it’s “much darker” than Episode VII.

Johnson did not reveal anything about the new script, but the crew has been screening Twelve O’Clock High (1949) – a movie that uses actual World War II footage – and Russian survival film Letters Never Sent (1960). Shooting takes place in London and in Iceland.

We do know the entire cast of Episode VII is returning for the upcoming movie, including Han Solo, according to Disney’s Kathleen Kennedy. She also said that Gwendoline Christie’s Captain Phasma will become more important to the story in the future.

Mark Hamill has already been spotted in England following a day of shooting Episode VIII, and he did not have the beard he had in The Force Awakens.

Johnson will also write the script for Episode IX, with Jurassic World’s Colin Trevorrow, set to direct. Episode VIII is set to hit theaters at some point in 2019, with Ridley already rumored to star in the new film.

Rogue One will be the first Star Wars spinoff, telling the story of a brave team of rebels tasked with retrieving the plans of the Death Star that’s blown up in the first Star Wars movie. The action, therefore, takes place between Episode III and Episode IV and explains how the rebels learned the secrets of the massive weapon.

Interestingly, per The Guardian, will use CGI to recreate Peter Cushing’s Grand Moff Tarkin, whom Star Wars fans will recognize from his verbal duels with Darth Vader. The special effects team apparently has their work cut out for them, as there’s no footage showing Cushing’s legs – he did not wear the boots from his Empire uniform during shooting as they were uncomfortable, so he appears on screen only from the ankles up in all scenes.

The characters have not been named, but Mikkelsen is rumored to play Galen Marek, one of Darth Vader’s apprentices in the uncanonical expanded Star Wars universe. Galen is apparently a “scientist that took over the Geonosian Death Star project,” and Jones plays his daughter.

Gareth Edwards (Godzilla) is directing, with Christ Weitz in charge of the screenplay. Alexandre Desplat is composing the music for the film. The man who sculpted Darth Vader’s helmet is also working on the movie.

The Han Solo anthology project is definitely an interesting development as well, as Han Solo is an iconic Star Wars character. The movie comes out on May 25th, 2018, but casting for young Han Solo is accelerated because the chosen actor might play young Han Solo in other Star Wars movies before this one.

The film tells the story of how Han Solo grew to become one of the most famous smugglers in the universe, and how he played a major role in bringing down the Empire. The story of this film isn’t clear just yet, and we have no idea when the movie is set chronologically.

Phil Lord and Chris Miller will write and direct the movie, which will be Lawrence Kasdan’s last Star Wars credit.

The Boba Fett anthology movie is also something many fans are excited about. The film is not confirmed yet, but it’s rumored for a 2020 release. The unauthenticated photo above, obtained by IndieRevolver last July, does list a Fett/Solo anthology movie, but also a Kenobi film (Balance of the Force). From the looks of the image, the Fett/Solo project might be the same movie, though we’d prefer it if each character got his own film.

Vulture explains that Josh Tank (Fantastic Four) was set to direct an unspecified anthology film but has left the project.