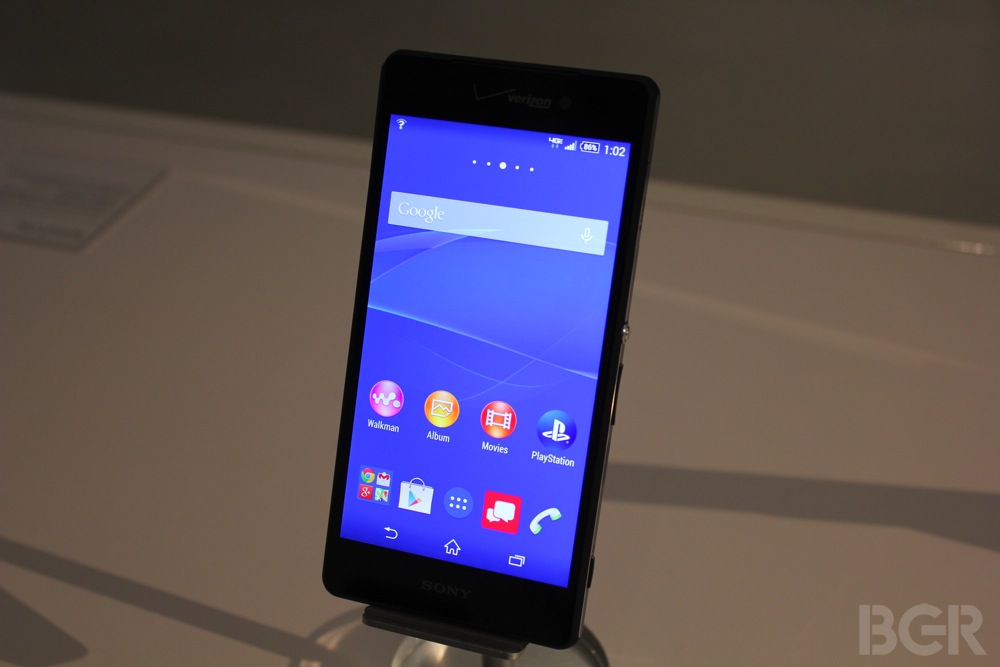 “The U.S. is one of the biggest smartphone markets in the world. It’s also one of the toughest,” Sony Mobile President Kunimasa Suzuki said as Sony prepared to announce its latest Android smartphone.

It’s an uphill climb for Sony to make an impact in the U.S. market, but the company is doing everything it can to match specifications with the best Android phones on the market. Sony’s Xperia Z3v is the Verizon exclusive model of the Xperia Z3 line, strikingly similar to the Z3 itself but with slightly different dimensions and few tricks of its own.

The first thing I noticed about the Xperia Z3v was its size. In a world of increasingly thin devices, the Z3v is boldly bulky, but doesn’t seem to have gained any weight. Holding an iPhone 6 in one hand and a Z3v in the other, there was no discernible difference. Unfortunately, I’m also not sure if I would have noticed the difference between a Z2 and a Z3v at all, weight included, had I never seen the Z2 in person before.

That’s the biggest problem with the Z3v specifically and the Z3 line a whole — it’s not breaking any boundaries. Rather than take this opportunity to try something new, like HTC is doing with the Desire Eye, Sony chose to stay the course. From a distance, the Z3v could be any Xperia phone. It doesn’t shine. No one on the train is going to ask you what phone you’re using, other than possibly out of confusion.

That said, it’s not a bad device. The Xperia Z3v is easy to use, it’s fast and its 5.2-inch 1080p display is bright and attractive. But I have no idea what the No. 1 selling point is. As you’ll see below, nothing stands out to make the Xperia Z3v any more desirable than an iPhone 6, HTC One (M8) or even the Galaxy S5.

There are a few unique features contained with the Z3v. Most important is its Qi wireless charging functionality. Using Sony’s proprietary wireless charger, the new flagship exclusive doesn’t need to be plugged in to charge. It also features an enhanced camera experience with a wide variety of camera apps, including the very cool Face in app, which allows you to film with the rear camera while including yourself in the image with the front camera.

The Z3v is also compatible with high-resolution audio headphones, features the never-not-cool PlayStation 4 Remote Play functionality. This might be enough to convince a few dedicated PlayStation fans to make the switch — after watching the demo for several minutes, it’s clear that the Z3v is just as capable of a Remote Play device as the Vita, provided you’re willing to strap a controller to your cell phone.

Plenty of accessories were on display as well, including the SmartWatch 3, the DualShock 4 wireless controller, the GCM10 Game Control Mount (for the DualShock 4) and the aforementioned CPW5 Wireless Portable Power Supply.

Verizon is intent on bringing more people into the Sony ecosystem as well, offering a $200 rebate to anyone who picks up the Z3v and the Z2 Tablet this fall. In case you’ve forgotten, we enjoyed our time with the Z2 Tablet, but much like the Z3v, it isn’t going to change your mind about Sony. That said, if you’re looking for a competent Android phone and tablet combo, it’ll be tough to find a better deal any time soon.

The Xperia Z3v launches as a Verizon exclusive on October 23rd for $199.99 on a new two-year activation.