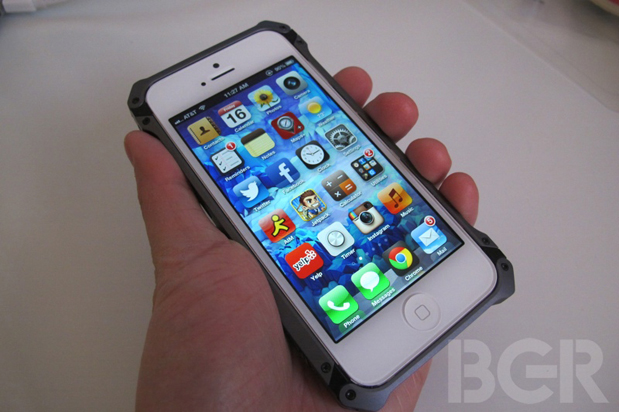 I don’t believe in cases for your smartphone. Why cover up your svelte phone with a piece of cheap silicone or a plastic when its designers worked so hard to get its form down to be perfect enough for you to buy it? Just as most people (I hope) don’t wrap BMWs in car “bras” to protect them from getting scratched up and people don’t put screen protectors around Rolexes, smartphone covers do nothing but make your phone thicker and bulkier – even the “thin” ones. What about “bumpers?” Those are so 2010. I can’t understand how Google (GOOG) thinks selling selling people $20 Nexus 4 bumpers is still cool. So when I got the chance to try out Element’s Sector 5 aluminum “bumper,” I wasn’t expecting much, especially since it sells for a whopping $145. But at that price, I had to find out — what kind of protection does a bumper that costs nearly as much as an iPhone 5 on contract get you?

The Sector 5 is essentially the follow-up to the Vapor case that BGR Editor-in-Chief Jonathan Gellar lauded as “top notch” and “really solid.” But that was a $79 bumper and not a $145 one. The Vapor case made sense as a high-end solution for the iPhone 4’s “antennagate,” but isn’t necessary for the iPhone 5 because the reception issues were resolved on the iPhone 4S.

While the iPhone 5’s light weight can be considered a wonderful selling point, those who want their phones to have just a smidge more heft to it like on the iPhone 4/4S have no choice but to slap on a case.

Putting on the Sector 5 is as simple as attaching a few transparent “Rash guards” around the iPhone 5’s aluminum antenna band and then unscrewing one screw to open the bumper. Then you gently squeeze your iPhone 5 into its precision cut “6061 aluminum billet” and “proprietary aerospace polymer” frame and re-do the screw. If you do it correctly, the iPhone 5 should fit snuggly inside of the Sector 5.

The last part of installation is sticking on a suede rear cover to give it a soft and grippy touch.

In my three weeks with the Sector 5 bumper on, I couldn’t help but feel like James Bond every time I whipped out my phone in public. The bumper looks every bit like a device made for military personnel. With the Sector 5 on, my iPhone 5 finally looked different enough to garner attention; an issue a lot of consumers seemed bummed about. I received curious looks and inquiries from people everywhere in the New York City subway, on the street, in restaurants, from my friends and even from the police (I kid you not).

The Sector 5’s protruding sides makes it easier to grasp comfortably in one hand without feeling like the phone will fall out of your hands. The Sector 5 gives the iPhone 5 its missing weight back and all without bulking it up too much.

Naturally, being the clumsy person that I am, I knew I would end up dropping my Sector 5-shielded iPhone 5 – lots of times. And I did.

It fell on the floor off my bed and it fell off my coffee table a handful of times. How did it do in the “drop tests?” Other than a few scrapes on the edges of the Sector 5, the iPhone 5 remained safe. It’s no TakTik or Ballistic Hard Core, but it’s brawny enough to survive a steep tumble just as long as you’re okay with the screen being completely unshielded. And just like the iPhone 5’s aluminum case, the Sector 5 is already showing some signs of scuffing and scratching. So take that into account if you’re the type to freak out over scratches on a $145 case.

If there are any tragic flaw to the Sector 5, it’s that the cut-out for the volume buttons still feels too recessed, as was the case on the original Vapor case, especially considering how close the frame is to the mute switch. It really helps to have fingernails or skinny fingers to access the side buttons.

Another issue I had was how easy dirt and dust got into the Sector 5’s cut-outs. I understand that the cut-outs give it a stealthy military look, but I hate having to constantly remove the bumper to brush off the pocket gunk that built up on the iPhone 5.

At $145, most people won’t reach for their wallets to preorder a Sector 5, “Made in the USA” or not. It’s a luxury item that doesn’t look or feel tacky and is as functional as it is sleek. It’s definitely a slick piece of kit but I wish it was priced below $100. At $50, these things would fly off shelves as fast as Incase and Speck cases.

Shoppers with money to burn have the BGR stamp of approval to give the Sector 5 a go, but for the masses, it’s not worth the expensive price tag even if it is the best looking bumper in town.