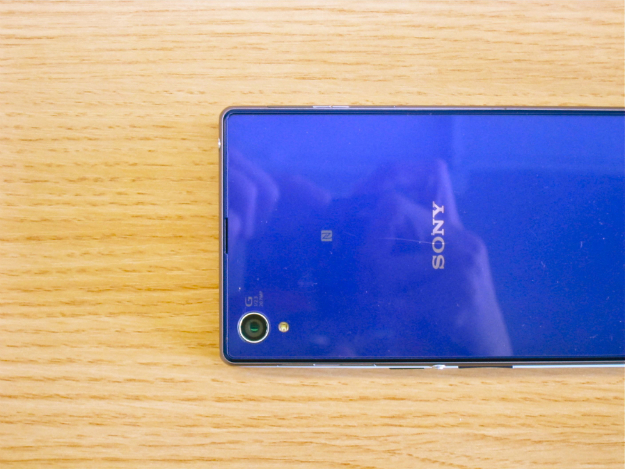 OnePlus has been revealing the specs of the One phone in a precisely orchestrated marketing campaign meant to further build hype around one of the most anticipated Android handsets of the year. After explaining processor choice and battery size in previous days, OnePlus CEO Pete Lau posted the first official picture of the OnePlus One on the company’s forums… although unfortunately the device is completely covered by the Sony’s Xperia Z1 smartphone. This clever marketing trick was used in connection with an actual OnePlus One revelation: The screen size of the phone.

The OnePlus One will have a 5.5-inch display with Full HD resolution (1920 x 1080) at 400+ pixels-per-inch (PPI), Lau revealed. But even so, the phone will actually be smaller than the Xperia Z1, a 5-inch handset announced last year, at least when it comes to width. In a recent ask-me-almost-anything session, OnePlus employees revealed that the One will have a screen-to-body ratio bigger than the Nexus 5, which delivers an impressive 72%. Meanwhile, the Xperia Z1 has a ratio of 64.5%.

The image hints that the One will have very small bezels and a rather small footprint for a phablet-sized display. For what it’s worth, the Xperia Z1 measures 144 x 74 x 8.5 mm. Sony increased the screen size in its newest flagship phone as well, to 5.2-inch,es but the Xperia Z2 is slightly taller than its predecessor, measuring 146.8 x 73.3 x 8.2 mm.

Lau also said that the One’s display will be made by Japan Display and will feature Touch On Lens modules that will help reduce “the distance between the touch sensor and display panel, while also being 300% more shatterproof than the competing OGS [One Glass Solution] technology.”

Furthermore, the display will be more battery friendly, Lau said.

“The screen is equipped with both CABC and DRAM technology,” the exec wrote. “This new and innovative technologies sense when the contents on your screen are dynamic, and consume less energy when the image is static, allowing the vivid 5.5-inch display to consume even less power than normal 5.0-inch displays with the same brightness.”

In related OnePlus One display news, @evleaks on Monday tweeted that One buyers will have a choice between on-screen and capacitive buttons, without offering any images of the device or revealing more details about it.