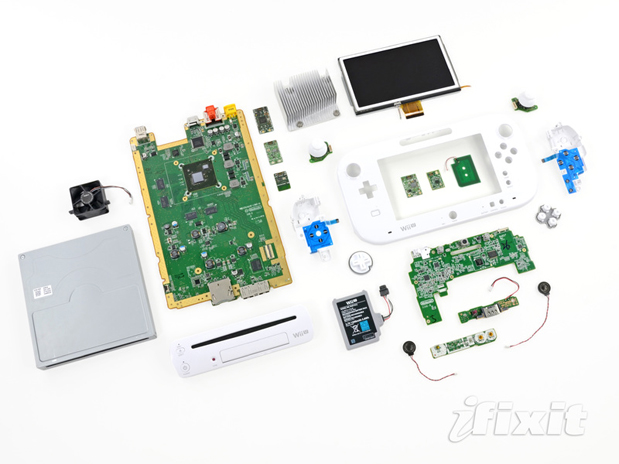 Nintendo’s (NTDOY) Wii U launched on Sunday to much fanfare. As gamers snapped up preordered consoles and games, scalpers took to eBay and Craigslist to sell Wii Us for double their value. Even without the availability of Nintendo TVii at the console’s launch, the Wii U is off to a good start. Naturally, the iFixit team broke out the screwdrivers and went straight to cracking the unit open. What did iFixit discover? For one thing, the Wii U has flash memory chips made by Samsung (005930) and an HDMI controller made by Panasonic.

The other interesting find is that Nintendo didn’t focus on shrinking components in the Wii U. It’s usually the case that components are shrunken down as much as possible to enable a more compact design, but it appears Nintendo went with a larger processor die and an oversized optical drive and heat sink instead.

iFixit says the larger-sized components allow the Wii U to be quieter and also cheaper to produce, as tinier parts usually cost more. That said, according to Nintendo president Satoru Iwata, the company is still losing money on every Wii U console it sells.

Upon opening the GamePad controller, iFixit also reveals the 6.2-inch touchscreen’s resolution is a measly 854 x 480. It’s not HD and doesn’t have a high pixel density, but it still looks great while playing.

Unlike Apple (AAPL) products, iFixit praised Nintendo for making the Wii U and GamePad easy to disassemble and repair thanks to a simplified design that doesn’t use much adhesive. A final 8/10 score was awarded to the Wii U, where a 10 is the easiest to repair. This is great news for DIYers who prefer to repair their consoles with off-shelf parts, especially since the trend as of late has been to prevent users from opening their devices.