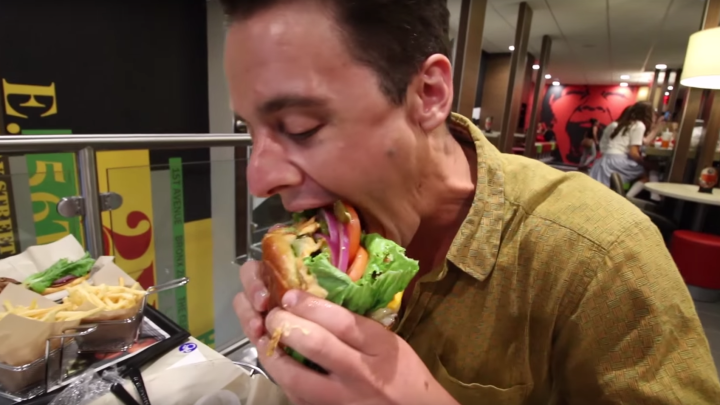 What would it look like if you went to McDonald’s and ordered a burger with everything? As in, literally, everything? YouTuber Casey Neistat recently went with his friend Oscar to a McDonald’s in New York that featured a new “Create Your Taste” kiosk that lets you build your own customized hamburger. To test the limits of what this kiosk is capable of, they used it to create a massive burger that ended up costing $12.

Remember when we told you about some former McDonald’s employees who shared all those awesome secret menu hacks? Well, they were nothing like this…

So what was in this monster burger, you ask? Here’s a partial list:

And what did it taste like? Well, Oscar seemed to feel absolutely miserable after eating this beast, which isn’t surprising since it featured 12 times the cheese of a regular cheeseburger.

“Triple-x bacon… don’t do it,” he groans toward the end of the video. “Don’t even try.”

Still, he seemed to like the burger’s taste overall and remarked that, “I asked them to mix a bunch of ingredients that don’t really go together and it still tasted very good.”

Check out the whole video below to get their full impressions.