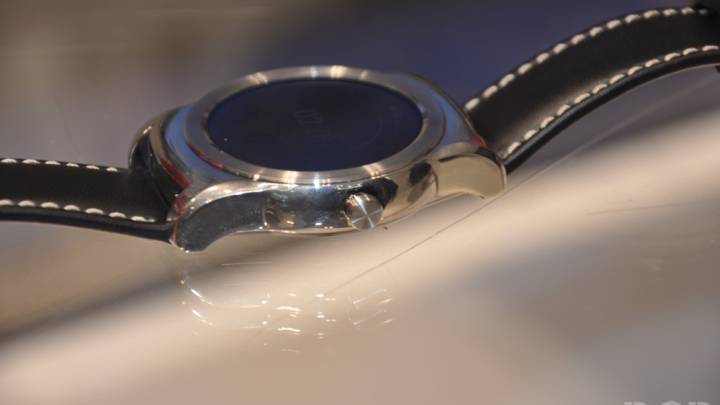 A few days before MWC 2015 kicked off, LG unveiled not one but two interesting wearable devices, and even though they share the same name, they’re actually quite different. The LG Watch Urbane LTE model that I saw earlier is a SIM-enabled smartphone on your wrist, a device that’s pretty bulky, even though it looks good and you could easily get used to that big metallic piece of technology on your hand.

But the real looker on LG’s hands is the LG Watch Urbane that looks even better in real life than in pictures and videos.

If you liked the Moto 360 design, and its round version of Android Wear — yes, that’s a different reason why the Watch Urbane might be better than the LTE model that has its own special OS version — then you’re certainly going to love the looks of the Watch Urbane.

The successor of the LG Watch R, the Watch Urbane should be the device to look for in stores, in case you’re buying an LG smartwatch this year. The wearable seems to be LG’s timid entrance into the luxury watch department, although it won’t quite compete against the Apple Watch Edition just yet.

Even so, the Watch Urbane looks and feels terrific. It’s much thinner than its LTE brother, and sits perfectly on your wrist. With its obviously slimmer profile — after all, it doesn’t need to house a SIM card — it would be a good fit for both women and men. LG will not make two distinct versions, as it’s the case with the Apple Watch. The versions I tested had leather bands, though it’s not clear what kind of bands you’ll find in the box.

The device will come in two default versions when it comes to color choices though, including silver and bronze, and users will be able to further customize the look of their devices by adding any compatible 22mm bands they desire, and by personalizing their watchfaces — though that’s something handled by Android Wear. A gold model is not available, at least for the time being.

Hardware-wise, the Watch Urbane shares some of the specs found on the LTE model, including the 1.3-inch P-OLED display with 320 x 320 resolution, 1.2GHz Qualcomm Snapdragon 400 processor, 4GB of storage, heart rate sensor and IP67 certification. However, the device has a smaller, 410 mAh battery, and half the RAM (at 512MB).

Unfortunately, there are no details regarding pricing and availability dates yet, so you might end up choosing something entirely different by the time the Watch Urbane ships.