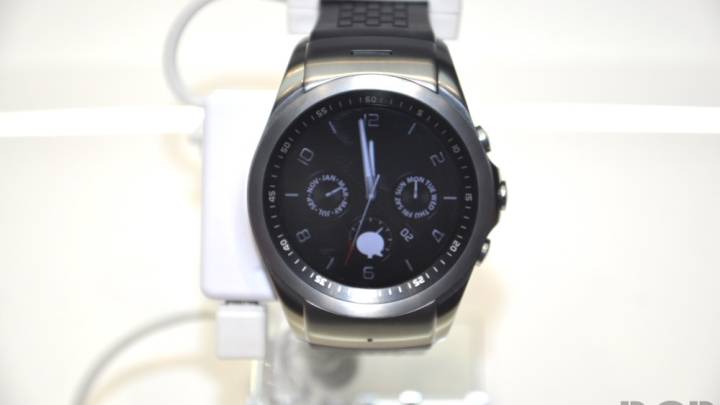 A few days before the MWC 2015 madness started, LG surprised smartwatch fans by announcing a one of the best-looking smartwatches yet, at least until Huawei’s watch was unveiled: the LG Watch Urbane and its SIM-card carrying cohort, the LG Watch Urbane LTE. After taking the later for a brief stroll at MWC, I can say that it looks and feels good on the wrist, but it’s also a little bulky. Not to mention the fact that it runs on LG’s “Wearable Platform,” which might take some adjusting to.

The smartwatch packs a lot of power under the hood, which should be enough for it to perform the kind of tasks you expect from such a device — delivering notifications from all sorts of apps, and so on. But the Urbane LTE model also has phone capabilities, in similar fashion to a recent Samsung offering, that will let it make calls and send text messages by itself, as long as you’re ready to invest into a second SIM card and wireless account.

Interestingly, the device also has push-to-talk walkie-talkie features, if that’s something you want in a smartwatch.

In addition to the obvious touch-based interaction, the watch also has three physical buttons on the right side, each of them sporting a different function. The top button gets you to a Quick Settings menu where various settings can be adjusted, while the center button will let you move back and forth between the apps installed on the device and the user-customizable watch face currently displaying

The third button acts as a back button, and can be used as a shortcut to enable an emergency call or to send the wearer’s location to a contact.

Once you get the hang of it, you’ll be able to quickly move between menus and apps, especially if you’ve dealt with any other wearable devices before. LG is trying to make the most of the round screen, while doing its own thing with the operating system, rather than using Google’s Android Wear. The device proposes an app interface that offers access to a circular carousel that includes installed apps, which in turn have their own circular icons.

As for actual hardware, the watch packs a 1.3-inch round P-OLED display with 320 x 320 resolution, 1.2GHz Qualcomm Snapdragon 400 processor (the kind that you’d have found in phones not too long ago), 1GB of RAM, 4GB of storage, LTE support and a 700 mAh battery.

Other noteworthy features include NFC support that can work with wireless payments, a heart rate sensor on the back and an IP67 dust and waterproof rating.

Of note, the device is definitely less sexy than the Android Wear-based Watch Urbane model, which doesn’t support its own SIM card.

More images of the Watch Urbane LTE follow below.