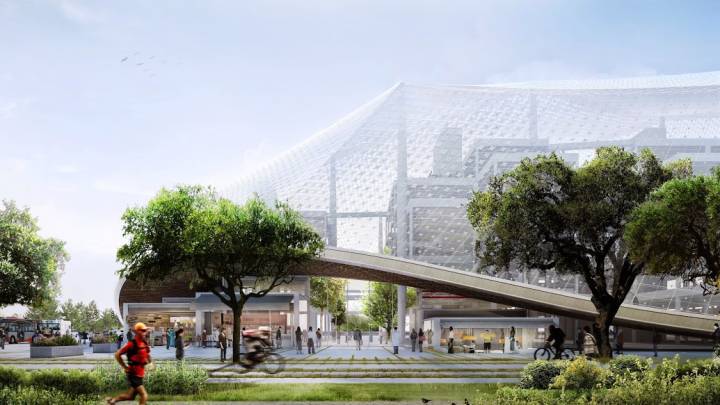 Apple has gotten a lot of attention for the work it’s doing with its so-called “Spaceship” campus but it turns out Google is looking to build an insane-looking futuristic campus of its own. Google on Friday revealed plans to build a massive new campus in the North Bayshore area of Mountain View, California and it posted some absolutely stunning renders of the proposed campus on its Google+ page.

FROM EARLIER: Biggest leak yet shows the Galaxy S6 Edge is going to look so much better than you thought

What makes this new campus particularly striking is that it sounds like Google is taking a page from its Project Ara smartphone and will make its new campus almost moddable.

“Instead of constructing immoveable concrete buildings, we’ll create lightweight block-like structures which can be moved around easily as we invest in new product areas,” Google explains. “Large translucent canopies will cover each site, controlling the climate inside yet letting in light and air. With trees, landscaping, cafes, and bike paths weaving through these structures, we aim to blur the distinction between our buildings and nature.”

And like Apple, Google is going to place a real emphasis on powering its gigantic campus through renewable energy.

“We’re committed to do everything we can to save energy,” writes Google. “Our recent agreement to offset our energy consumption in North Bayshore with renewable energy includes the development of this proposal.”

We’ve swiped some renders of Google’s proposed campus and have posted them below. By all accounts, this new campus is going to be absolutely stunning.