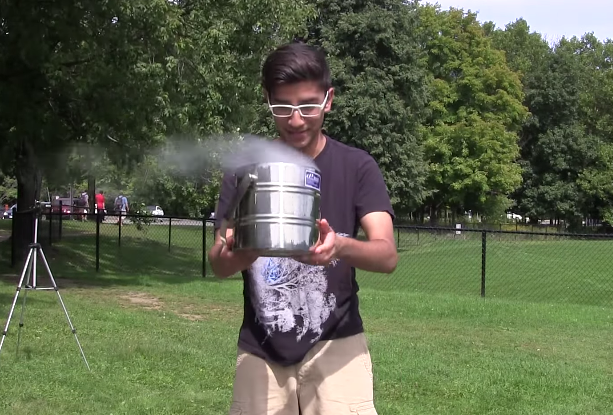 The band members of Spinal Tap always talked about “the fine line between stupid and clever,” and that’s about all we can think of while watching this latest Ice Bucket Challenge video produced by chemist Muhammad Qureshi, who decided to one-up everyone else who has taken the challenge so far by pouring liquid nitrogen all over his head.

FROM EARLIER: Stephen Hawking delivers the most heartwarming Ice Bucket Challenge video yet

For those of you who don’t know your science, nitrogen has to be very cold before it becomes a liquid — it has a boiling point of −321 °F and a freezing point of −346 °F, so any liquid nitrogen you encounter will be within that temperature range. Because Qureshi knows what he’s doing, however, he does not get immediate frostbite after dumping the liquid nitrogen on himself and manages to survive unscathed… although he still emphasizes that no one should try doing this at home themselves.

Why did Qureshi not suffer immediate frost burns? He can thank the Leidenfrost Effect, which IFLScience informs us occurs when a “surface temperature is so hot that it generates a thin layer of vapor that lies between the surface itself and the liquid” and thus “causes the liquid to become insulated, and slows down the evaporation.” In other words, Qureshi’s body temperature is so hot relative to the temperature of the liquid nitrogen that contact between the two creates an insulating barrier that saves him from suffering immediate harm.

That doesn’t mean you can just sit there after dumping the nitrogen on yourself, of course — Qureshi constantly had to shake out any liquid from his hair, his skin and his shirt immediately after dumping it onto himself to make sure none of it got stuck anywhere.