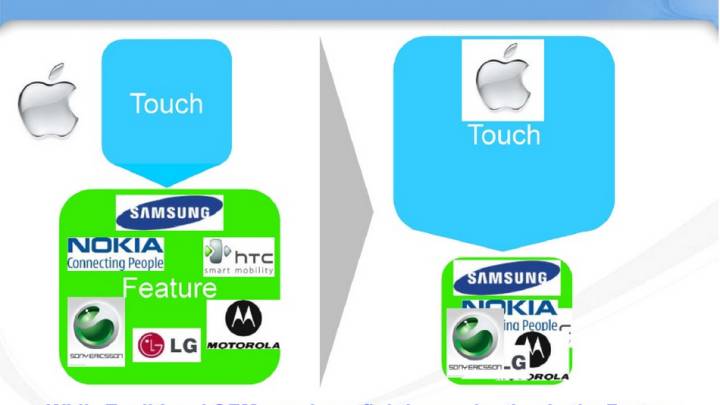 New evidence presented in the second Apple vs Samsung patent lawsuit reveals that Samsung realized early on that the iPhone would pose a significant threat to handset makers, identifying Apple as the company to beat in the years to come.

In an internal presentation from July 2008, Samsung acknowledged that the iPhone 3G was “redefining the U.S. market dynamics” – Apple’s second-gen iPhone only became available on July 11 that year. “While traditional OEMs are busy fighting each other in the Feature phone space, Apple is busy making the category obsolete,” Samsung wrote in a slideshow, adding that “Samsung’s strengths do not translate well to touch.”

The company concluded that “software is the new value driver,” as “focusing on hardware is a losing proposition for direct iPhone competition.” According to the company, what makes the iPhone unique “is software (applications) and services,” with “beautiful hardware” being seen as just a “bonus.”

Furthermore, Samsung also noted that “it is no coincidence that Nokia purchased full control of Symbian last month,” with the mobile OS being a “key piece of their ecosystem building activity.”

Samsung realized that its “competitive advantage” to provide various devices for all needs “serves it very well in the Feature phone segment.” However, “for touch this capability is almost irrelevant.” “Diversity in application and experiences with clear proposition are valued for touch,” Samsung said.

The company also revealed that when it comes to hardware innovation, it should focus on “subtle” areas, like maximizing the display to total frontal area ratio, battery technology, imaging and thermal isolating materials (as “devices get hot when in use for extended periods of time”).

The Samsung July 2008 presentation submitted into evidence follows below.