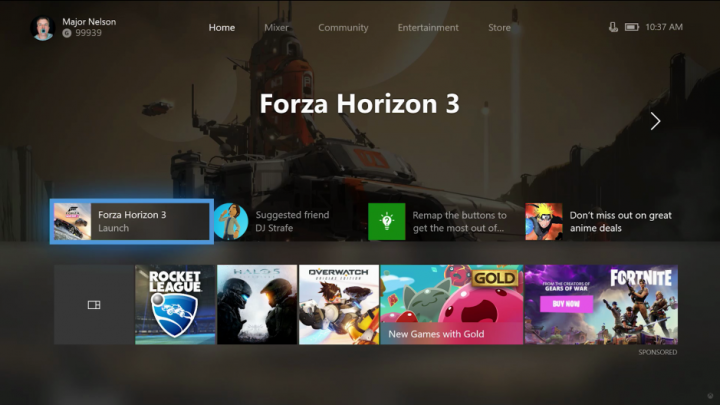 Microsoft has tooled with the Xbox One user interface pretty frequently since the console launched in 2013, but no matter how much work the developers put into it, the dashboard is still difficult to navigate and as slow as its ever been. Thankfully, on Monday, Microsoft unveiled another major overhaul that is set to arrive for Xbox Insiders in the Alpha Ring of testing starting this week.

First and foremost, the upcoming update will completely overhaul the Home screen on the Xbox One dashboard once again, putting an emphasis on personalization. The new and improved look is part of Microsoft’s Fluent Design, which should make the interface faster and smoother than ever before. Once the update rolls out, Xbox One owners will have the ability to customize the Home screen how they see fit, adding apps, games, friends and more to the screen they see when they launch the console.

In addition to the new Home screen, Microsoft has also updated the guide to make it easier to navigate between tabs on the dashboard. The guide features the same content, but it has all been reoriented horizontally to make it easier to quickly flick between the tabs and find what you’re looking for. Plus, it looks infinitely faster than the current guide, which has a tendency to lag.

Finally, the Community section is getting upgraded as well with a new activity feed and tools to make it easier to find new Clubs you might want to join. Beyond the Xbox One, Microsoft is also making easier to enable and disable Game Mode on Windows 10 by putting a switch on the Game bar.

As much trouble as Microsoft has had deciding on an interface that works for the Xbox One, this update looks promising. No release date yet, but it should be available for everyone later this fall.