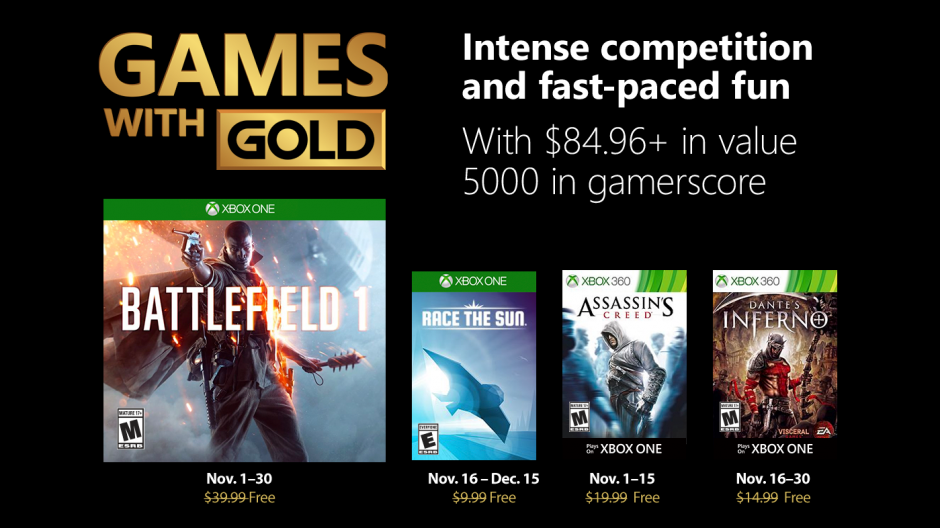 With just a day to spare before the end of the month, Microsoft has unveiled its next slate of free games for Xbox Live Gold members on Xbox One and Xbox 360. Leading the way is Battlefield 1, which launched almost exactly two years ago, but has received regular updates ever since. With Battlefield V set to release on November 20th, you can dive in to its predecessor for free and get a feel for the controls over the next few weeks.

The other highlight of the month is the original Assassin’s Creed, which you can play on Xbox 360 or on Xbox One via backward compatibility. Having spent so much time with Assassin’s Creed Odyssey over the past few weeks, I’m very intrigued to see how the original game holds up over a decade later.

You’ll save nearly $85 if you pick up all four games and can add a bunch of points to your gamerscore. Also, keep in mind that each of the Xbox 360 titles are backward compatible with the Xbox One, so even if you don’t have an Xbox 360 on hand, you can still download all four games listed above. And as always, some of last month’s free games are still available if you hurry, so be sure to download them before they go back to being paid.