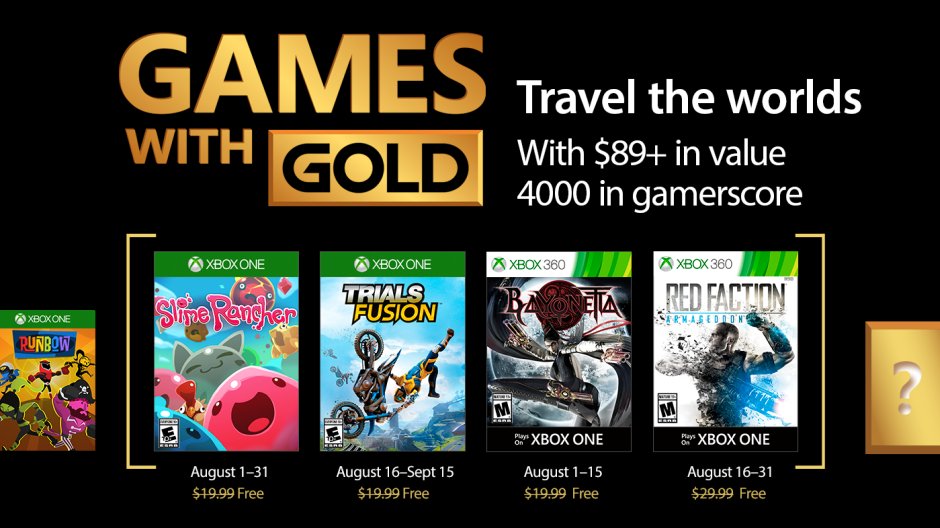 As we approach the end of summer and students everywhere prepare to go back to school, Microsoft is doing its best to ease the pain and suffering by releasing one of the best Games with Gold selections of the year in August. If you have an active Xbox Live Gold subscription, you’re going to want to add all four of these great games to your collection while they’re free on the Xbox Store.

August’s Games with Gold will kick off with Slime Rancher on the Xbox One, a game in which you have to round up slime monsters for your ranch. Everyone’s favorite physics-based motorcycle side-scrolling racer Trials Fusion will also be free to download in August, while Xbox 360 owners will kill countless evil angels in Bayonetta and shoot up Mars in Red Faction: Armageddon.

Here are the details on the availability of the Xbox One and Xbox 360 Games with Gold for August:

You’ll save almost $90 if you pick up all four games and can add up to 4000 points to your gamerscore. Also, keep in mind that each of the Xbox 360 titles are backward compatible with the Xbox One, so even if you don’t have an Xbox 360 on hand, you can still download all four games listed above.

You can check out footage of all four of August’s free Games with Gold in the video below: