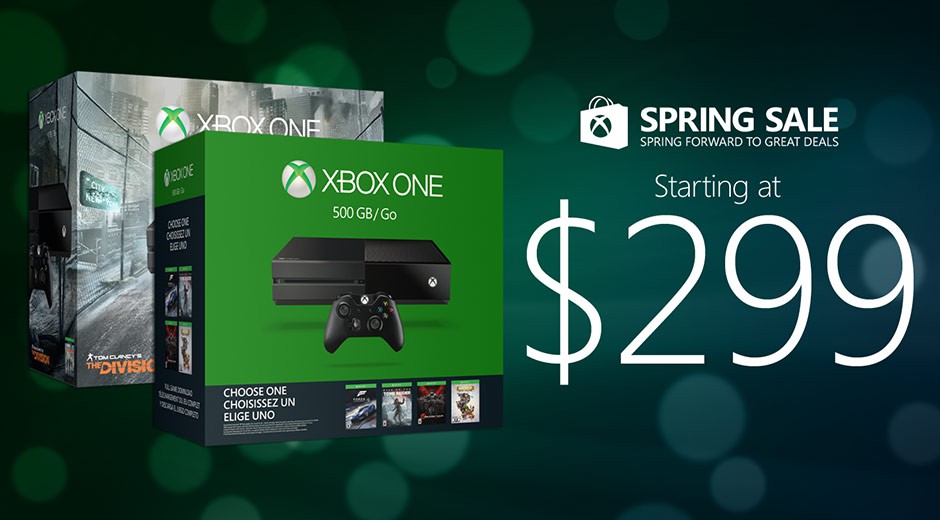 Looking for a great deal on a brand new console? Look no further than Microsoft’s Spring Sale, beginning on March 20th, during which Microsoft is knocking the price of the Xbox One down to $299.

That’s $50 off every Xbox One console bundle at participating retailers, including The Division bundle, the 500GB Name Your Game bundle and the upcoming Quantum Break bundle, which will begin shipping early next month.

Two days later, on March 22nd, Microsoft will expand the sale to include Xbox games, PC games, movies and TV shows from the Xbox Store. Microsoft is promising savings of up to 60% off on new games, including Fallout 4, Halo 5, Black Ops III, Far Cry Primal, Rainbow 6 Siege and over 150 other titles.

As always, Microsoft is sweetening the deal for Xbox Live Gold members as well, offering up to 10% additional savings for paying subscribers.

The Spring Sale lasts from March 20th – March 28th, so you have a little over a week to take advantage of the deals. If you want to keep track of the sales all week, be sure to follow along on Xbox.com/spring-sale.