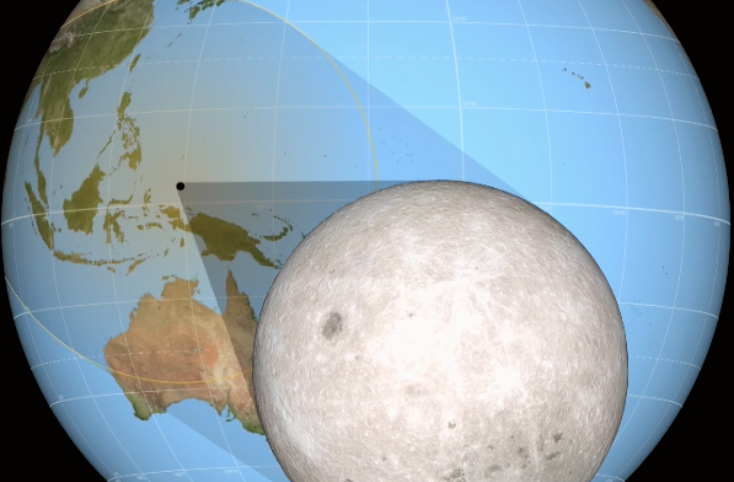 How can something start in the future and end in the past? It usually doesn’t. But then, there are some weird exceptions, and we’ll get to witness one later this week. A total solar eclipse is due to start on Wednesday, and it’ll be visible until Tuesday. How is this possible? We’re about to explain.

It all happens because of the way we humans have decided to keep time on Earth. The eclipse will be visible in parts of the western Pacific on Wednesday morning local time, and then make its way towards the Pacific coast, where it’ll be Tuesday afternoon local time, The New York Times explains. You’ve probably guessed it: The eclipse will cross right over the international date line, which is why the event will end in the past – depending on how you look at it.

In total, you’re going to get some four minutes of total solar eclipse time this week, with people in parts of Indonesia, Borneo and Sulawesi getting to experience a blackout from 7 to 11 a.m. local time within a narrow strip of about 90 miles.

“The cool thing for those who are going to be in the path of totality is that they are going to be able to see the outer atmosphere of the sun called the corona,” NASA solar astrophysicist C. Alex Young told the Times. “This is only visible from the ground during a total solar eclipse.”

People in Australia, South China, Southeast Asia, Hawaii and Alaska will also get to experience the eclipse though they’ll only get the moon’s second shadow, the penumbra. The following Times video shows the exact path of the upcoming solar eclipse.