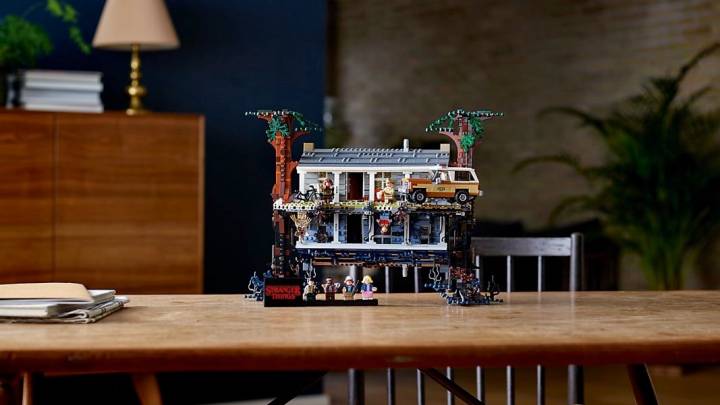 If you’re a fan of Netflix’s Stranger Things series, then the Stranger Things set that Lego just launched will easily be the best thing you see all day. It’s not just the concept of the set, but also the way it’s advertised and presented, as Lego went above and beyond for this one.

The Stranger Things: The Upside Down Lego set features both worlds that the series explores: The heightened reality of the 1980s, and The Upside Down, where all of those nasty monsters reside:

The Byers’ house has an identical replica in The Upside Down, and you can flip the whole thing once it’s assembled, depending on which world you like best. Even the box can be flipped to show either reality:

You get a bunch of minifigs, including Eleven, Mike, Lucas, Dustin, Will, Joyce, Jim Hopper and a Demogorgon (complete with an open-mouth piece). The house will surprise you with some super specific details from the series, including the alphabet wall, as well as other rooms of the house.

You also get Chief Hopper’s car to play with, and plenty of accessories for the characters. But wait, it gets even better than that, because Lego created a presentation video that’s very in line with the period of the show, from the resolution of the clip to the way Lego is selling the toy. Absolutely amazing:

Don’t get me wrong; you’ll still have fun with it even if you haven’t seen a single episode of the show. After all, it’s a 2,287-piece set that’s incredibly complex to build, even without the context. But if you want to enjoy it truly, then head to Netflix to catch up on seasons 1 and 2 before the next season premieres (on July 4th, by the way).

The Lego set, meanwhile, launches on June 1st for $199.99, but preorders are available right now, as long as you’re a Lego VIP member.