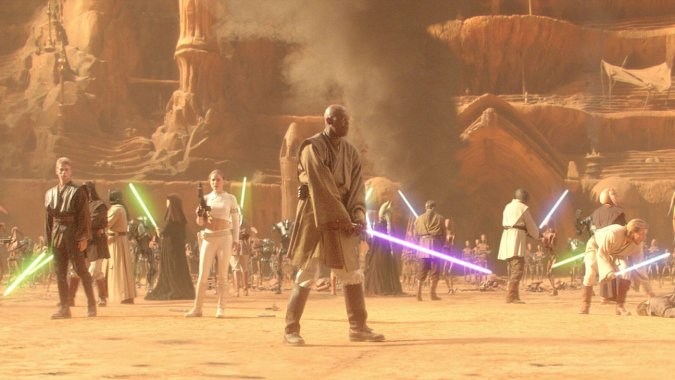 When we think of Star Wars Episodes I-III, it can be hard to separate the good from the bad. I know it’s tempting to say that the entirety of the Star Wars prequel trilogy was one glaring mistake, but if you look a little deeper, you can actually find smaller, more granular issues within the films as well.

Over the weekend, Screen Rant shared its latest compilation video, this one focusing on 10 mistakes you might have missed in The Phantom Menace, Attack of the Clones and Revenge of the Sith.

One of my personal favorite errors comes when the Jedi Council arrives on Naboo, Samuel L. Jackson’s body double can be seen clearly in the background, walking alongside the other Jedi. If you couldn’t book Jackson while shooting that scene, why not just leave him out entirely? We didn’t need to see him there anyway.

But continuity and editing mistakes aren’t nearly as fun as CG mishaps, which include Anakin Skywalker snagging his lightsaber on his cloak. As in, the laser sword that can slice through solid objects and alien flesh. Anakin’s head also ends up clipping through a door, which might be one of the most “video game-y” mistakes in the entire series.

You can see the rest of the mistakes in the video below: