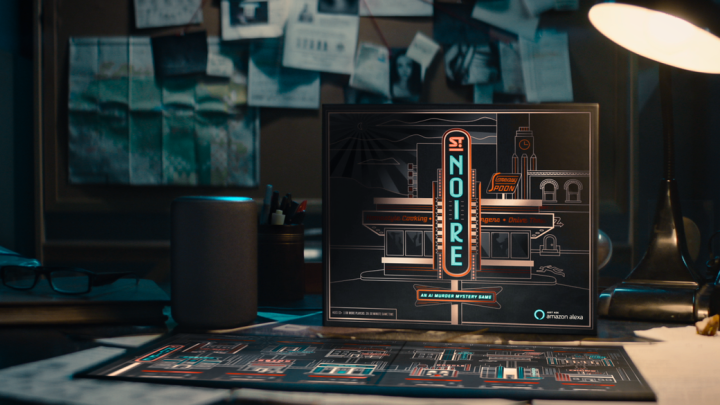 Nolan Bushnell’s famous dictum about what makes for a great game is that it should be “easy to learn, difficult to master.”

The Atari co-founder has told me that on more than one occasion, and it’s the mantra he used to turn the retro video game company he once led into a short-lived but beloved 1980s-era powerhouse of entertainment. That guiding philosophy also no doubt underpins St. Noire, an intriguing new board game that uses Amazon’s Alexa assistant and which the Atari founder will be showing off at Comic-Con.

The new game is a product of X2 Games, an enterprise started by Bushnell as well as Zai Ortiz, a creative director from Hollywood turned game-maker. Both men will be premiering the game, which is built around a detective story, on the #IMDboat during Comic-Con on Saturday, July 20, when celebrated writer/director Kevin Smith will also host a live show with the pair. Both men are also set to talk about the game itself in a presentation to convention-goers as well as talk about the evolution of “gamification.”

St. Noire is being billed as the first voice-controlled murder mystery board game. From X2 Games:

There’s been a murder in the small town of St. Noire — and the killer has promised to strike again! Can you solve the mystery before time runs out and the killer gets away? Find the clues, question suspects and trust absolutely no one. Someone is lying, and if you’re going to crack the case, you’ll need to figure out who … your move, Detective.

It’s available for pre-order now for $39.99 from Amazon ahead of its August 15 release. As far as how the game actually works, players have until the end of seven nights to solve a murder case. During every turn, you can either choose to examine a location for evidence, choose to question someone or accuse a suspect.

You win by correctly identifying and accusing the correct suspect before the end of the seventh night. You’ll lose early by making two incorrect accusations.

As we said, this game is powered by Alexa, which is an especially interesting hook here. Yes, it’s a board game, but in addition to cinematic background sounds, you’ll also hear dialogue performed by actors who play a dozen different characters and who perform more than 2,500 scripted lines. That amount of dialogue also allows for replayability — each new game uses a randomized killer and victim.