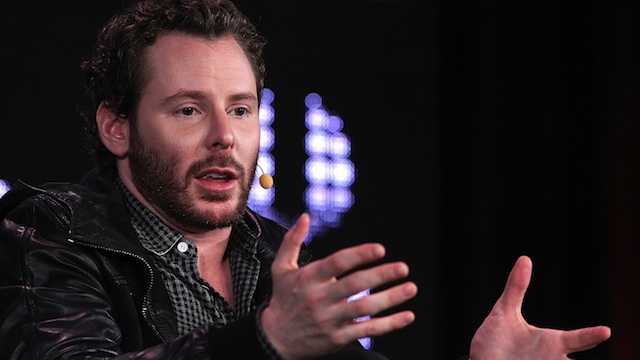 Sean Parker, best known for founding Napster and getting in early on Facebook, has a strange new line of work. The entrepreneur has a startup that’s meant to let you watch new-release movies in the comfort of your own home, in return for a small fortune.

Obviously, the only way Parker is ever going to persuade a movie exec to let him do digital rentals of brand-new movies is with a bunch of anti-piracy features. So, a man whose piracy-enabling software probably caused DRM to become popular is now thinking of crafty ways to prevent piracy.

Parker’s startup, which has yet to launch, is called Screening Room. The basic concept is you’d pay $50 to stream a movie the same time it came out in theaters. The idea is that rather than paying $40 for four movie tickets, then buying popcorn, you’d just invite a couple friends over, and stream the movie on your couch instead.

The biggest pitfall is piracy. Good-quality copies of movies don’t tend to appear on torrenting sites until the movie becomes available for digital download. Movie studios therefore worry that the two-month window that new movies typically have before appearing on torrenting sites would vanish, as it’s difficult to stop someone from copying a movie that they can stream in their own home.

TorrentFreak has noticed that Screening Room is trying to fight the problem. In the last week, it’s filed eight patents for anti-piracy technology. They sound freakishly authoritarian: “Monitoring Nearby Mobile Computing Devices to Prevent Digital Content Misuse,” for example, would prevent the movie from playing if too many mobile devices (which roughly correlates to people, in Parker’s mind) are near the streaming device.

Perhaps the most effective anti-piracy technique would be a way of watermarking every single copy, which would allow Screening Room to link a leak to a particular user account, and shut it down. That still sounds like an ambitious game of whack-a-mole, but it’s better than the unfettered piracy that happens today.