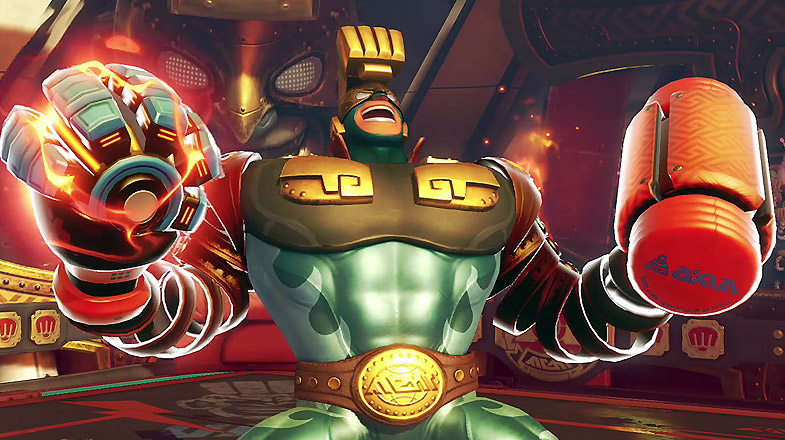 Last month, Nintendo released ARMS for the Switch — a frantic, fast-paced fighting game stocked with some of the most colorful, expressive characters in recent memory. Less than a month after launch, the first major update for the game arrives today, bringing a brand new character, a new stage, a new versus mode and tons of improvements and adjustments for competitive players.

The big news is that Max Brass, the ARMS League Commissioner and final boss of the Grand Prix, is now a playable character. He’s one of the bigger, slower characters available in the game, but he really packs a punch. Plus, when he’s charged up, he bulks up, moves faster and won’t flinch when he gets punched. Max Brass brings three new arms with him — Nade, Roaster and Kablammer — which can be unlocked by all of the other fighters as well. And finally, his Sky Arena stage has been added to the game.

Beyond Max Brass, Nintendo is also introducing a brand new versus mode to the game called “Hedlok Scramble.” In this mode, players will be able to hit a capsule to turn into Hedlok, another of the game’s most dangerous characters, for a limited time. This mode can be selected in Versus, Friend or Local and will also start popping up randomly in Party Mode.

Those are the highlights of the ARMS 2.0.0 update, but the patch notes indicate that they’re just the tip of the iceberg. Nintendo has also added stats to the main menu, raised the highest rank in Ranked Match to 20, increased the penalty for disconnecting during a Ranked Match and balanced some fighters:

As long as the ARMS community remains active, Nintendo will continue to release updates for the game periodically. In the meantime, another competitive Switch game — Splatoon 2 — launches in just over a week. All of a sudden, Switch owners are going to have a ton of new content to play with. And if you own a Switch but haven’t bought ARMS yet, it’s currently on sale on Amazon.