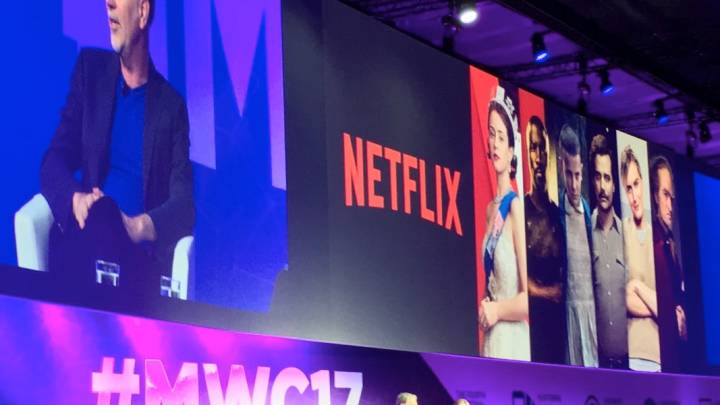 Netflix CEO Reed Hastings just took the stage on Monday afternoon at the Mobile World Congress show in Barcelona, Spain to talk about content “in the midst a period of disruption and change” during a light-hearted chat.

Interviewed on stage by the BBC, Hastings briefly touched on the company’s incredible Oscar win on Sunday. After that, Hastings spoke about what it means to launch original content across the world. Binge-watching, he said, has become akin to reading a novel.

Internet TV is “clearly” the way to go for content companies like Netflix and its competitors. Hastings, however, doesn’t seem afraid of the increasing competition, especially in coming years. That said, Netflix is “excited” about being at the forefront, and about having a huge slice of the market in the near future, when everything TV-related will be done over the internet.

Hastings explained that being at the forefront is also bringing to light more challenging topics, including suicide among teens — Netflix has an upcoming show based on that controversial topic. But since this is MWC, the conversation inevitably shifted to the technical part of streaming. Hastings revealed the company is looking to further improve its overall streaming performance and eliminate issues that might hinder binging sessions. Nobody likes buffering, am I right?

“Downloading is great” when it comes to having no internet at all, Hastings explained, when asked about Netflix’s new feature.

One other thing that can hinder binge-watching is data caps. Hastings said that some operators, without naming names, will offer users unlimited video streaming, even if that means a downgrade in image quality. Netflix is working on further improving codecs to decrease the size of streamed shows, especially in cases where a mobile operator might offer unlimited Netflix support.

The advanced screens on mobile devices, on the other hand, will force Netflix to invest in making shows look better on small screens and match the experience users get on regular TVs. “The screens today are stunning,” Hastings said, adding that mobile TV watching will become more significant in following years, especially for the generation of users that grows up with mobile devices.

“We want to be very flexible,” Hastings said, so that Netflix can be on any screen you might own.

When it comes to piracy, however, the Netflix CEO doesn’t appear to be too concerned. Hastings joked that he hopes pirates will download White Helmets, its Oscar winning show. But the CEO believes that Netflix brings an affordable service that decreases the need for piracy.

What about content when looking at the bigger picture? Hastings said Netflix isn’t about to instantly go global when it comes to content availability. Instead, Netflix is looking to develop more local content, and eventually give producers of local content access to a wider audience.

“We’re very passionate about collecting the best content” available and then share it around the world, Hastings said as he described the versatility of Netflix when it comes to producing original content, be it TV series, movies, stand-up specials or documentaries.

When asked about Netflix and cord-cutting, Hastings revealed that some 50% of US homes have subscribed to Netflix, but that did not significantly hurt the regular pay TV business. In other words, Netflix may convince some people to cut the cord, but most people seem to keep both their cable subscription and Netflix at the same time. That’s probably why Comcast now includes Netflix, which is just another “channel” that offers immediate access to a variety of TV shows and movies, and a model that other television providers may adopt in the coming years.

Binge-viewing is Netflix’s best feature, one that drives both content consumption and content creation, Hastings said, explaining that some shows end up getting made exactly because there’s an audience that loves Netflix binging.

Asked if he saw it coming — the popularity of Netflix streaming, that is — back when you could only buy Netflix content on physical drives, Hastings said that he first built the service on DVDs as a cheap content delivery system, and then expanded it to the internet as he waited for the technology to evolve.

The most surprising thing about Netflix, in Hastings’s view, is the way content is consumed across various markets and the diversity in movie watching preferences of every market.

Thanks to the internet, shows that would otherwise have a niche market can spread all over the world with the help of Netflix. “It’s really just beginning,” the CEO said.

In 20 years, we’re going to get into some “serious AI,” Hastings said. In 20 to 50 years, things get complicated, the CEO said, suggesting that humans may be augmented by AI, or that AI will take over the world. In that case, worrying about Netflix content will become a secondary problem. “Will we be entertaining you, or will we be entertaining AI?” Hastings joked.

As for “Netflix” becoming a verb in the day-to-day conversation, Hastings made sure to note that a particular Netflix-related expression wasn’t invented by the company.