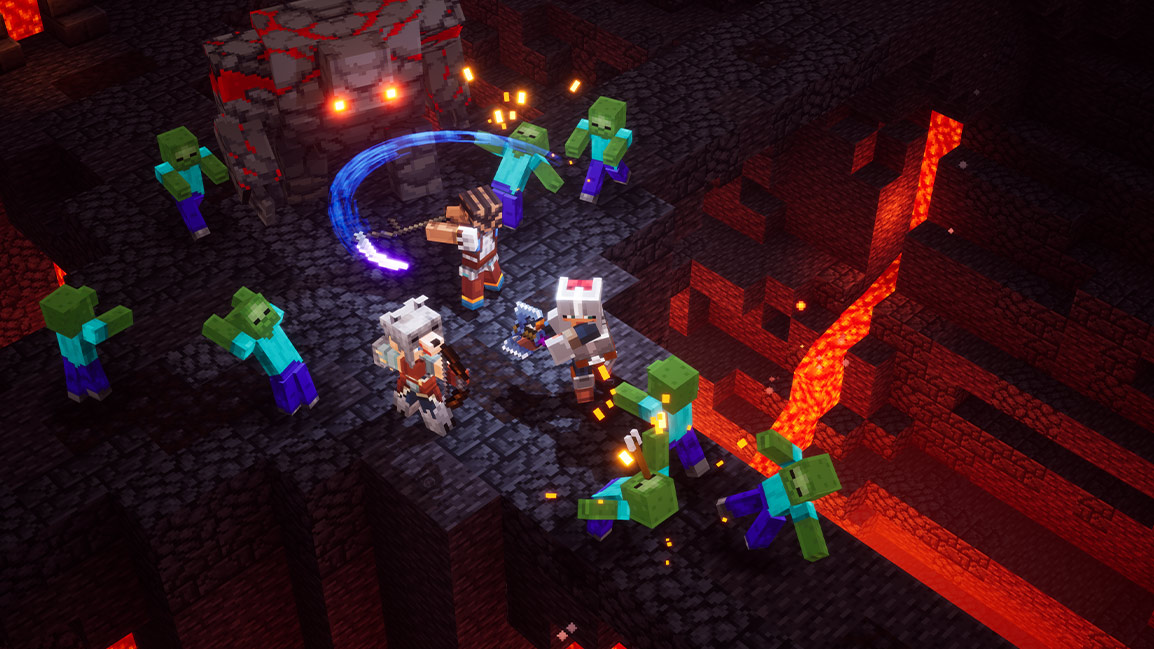 Gauntlet and Diablo are my personal dungeon-crawling touchstones. Some nights I’d hole up in the study, plunging into the hellish depths beneath Tristram to defeat the Lord of Terror. Other nights, you could find me downstairs with my Nintendo 64, collecting keys and popping potions as enemies filled the screen.

I have had a soft spot for top-down hack-and-slash adventures ever since, which is why I was intrigued by Minecraft Dungeons from the moment it was announced. This action-oriented offshoot is set in the same universe as Minecraft, but removes all of the pivotal creative freedom that made Minecraft the biggest game ever. And yet, even without that freedom, Dungeons succeeds on its own merits by breaking the genre up into its component parts and only using the essentials to craft a compelling experience that gamers of any skill level can enjoy.

When it comes to mechanics, within around thirty minutes of starting Minecraft Dungeons, you will have seen pretty much everything it has to offer. That might sound like a slight, but many of my favorite games are about the mastery of a very specific set of mechanics rather than asking you to learn how to use a new weapon or tool or ability every few hours. In Minecraft Dungeons, the loop is very simple, and that’s why it works.

That loop consists of picking one of several procedurally generated levels — 9 of which are currently in the game, but there are ways to unlock a few more — taking out every enemy you come across with your primary weapon and your bow, equipping new gear as it drops from vanquished foes, and completing whatever objective the game throws at you, be it defeating a boss, rescuing villagers, or destroying brewing stands.

If you’ve ever played Diablo, you’ll be familiar with the progression system of Minecraft Dungeons. When you defeat enemies and open chests, there’s a chance that you will receive a piece of gear that is more powerful than what you currently have equipped. Every primary weapon, secondary weapon, suit of armor, and artifact has a base power level, but they also have their own specific set of stats that sets them apart.

For example, the big sword I currently have equipped increases my chances of landing a critical hit, and my Archer’s Armor increases the damage of my arrows. You also get an Enchantment Point every time you level up, and you can use them to buff the gear even further. When you find a better item, you can salvage the old items for gems that you can spend at the shop for random gear, and you will get any Enchantment Points you spent on that item back. This system forced me into a few difficult decisions, and gives the game some much-needed depth.

There are a wide variety of weapons you can acquire in this game, from daggers to swords to glaives, and yes, even the iconic pickaxe. The speed and strength are different for each weapon type, and your play style will change a bit as well, depending on which weapon you opt to use. Combat consists of clicking on enemies to attack, and dodge rolling away when the going gets tough. The aforementioned artifacts add another dimension to encounters by allowing you to temporarily boost your strength, summon a pet, heal yourself and your allies, and more.

When all of the mechanics are working in harmony and the challenge (which you can set before you start a level) is just right, Minecraft Dungeons is an enjoyable simplification of the dungeon crawlers I grew up with. The fights are fluid and engaging, the patterns of the enemies are easy to learn (but large mobs will still punish you in the latter stages of the campaign), and the nearly nonexistent story is exactly as ephemeral as it should be.

Dungeons is a boiled-down version of games in this genre, but, for the most part, it’s a polished and entertaining one. What I will say is that you will have significantly more fun playing this game with a friend than on your own, and some of the levels — specifically the later bosses — become especially tough (and not in a super fun way) when you try to take them on alone. Sadly, there is no online matchmaking, which means you will need to have friends who own the game to play multiplayer, which feels like a huge missed opportunity.

Minecraft Dungeons might not take over your life the way that Diablo 3 has for many people, but this game is not just Mojang Studios cashing in on the Minecraft property. If you feel the urge to spend hours on end collecting even more powerful gear so you can take on the highest difficulty levels the game has to offer, Dungeons will give you plenty of carrots to chase until new content arrives in the form of DLC later this year.

Minecraft Dungeons is out now on Xbox One, PS4, Switch, and PC.

Microsoft provided BGR with a copy of Minecraft Dungeons for the purposes of this review. I played for a few hours on Xbox One, but spent a majority of my time with the PC version.